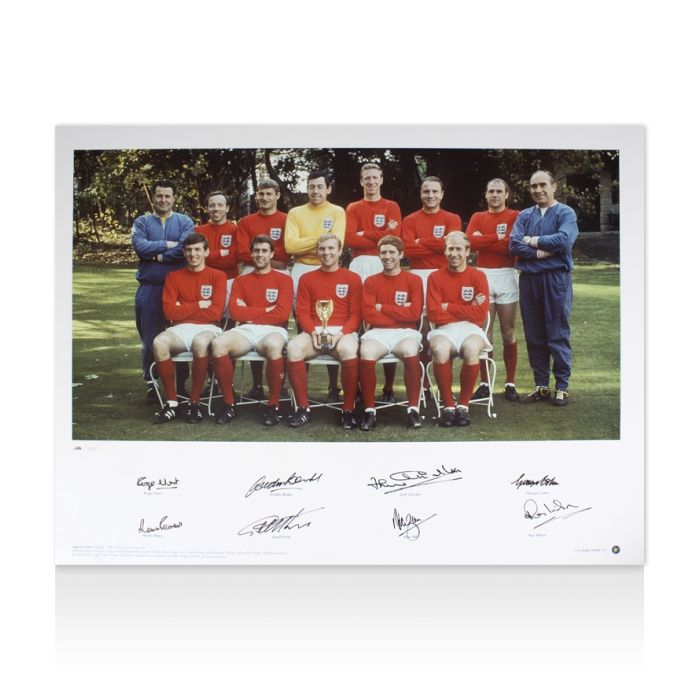 Details
"England will win the World Cup in 1966" predicted Alf Ramsey on his appointment as England Manager in May 1963. However, his prophetic words were to be thrown back at him time and time again during the next three years, as he struggled to build a World-beating team using his own, idiosyncratic methods. He experimented with a bewildering number of combinations of formations and players, attracting criticism from Press, public and players alike. In truth, he was a highly successful and revolutionary manager who assembled and inspired a hugely talented and committed national team. His most controversial decision was to dispense with wingers altogether, introducing a 4-4-2 combination in which the front men were Hunt and Hurst, and earning the team the epithet of the 'Wingless Wonders'. After a bad-tempered quarter final against Argentina, whose players Ramsey described as 'animals', followed by a thrilling semi-final classic against Portugal, in which even Eusebio's brilliance could not counter Bobby Charlton's two magnificent goals, England came up against West Germany in the final, for a clash that would prove to be truly unforgettable. The highs and lows of the final - Germany's equaliser in the dying seconds of the first 90 minutes, taking the score to 2-2, then, ten minutes into extra time, Geoff Hurst's disputed goal, followed, one minute before the final whistle, by Hurst's third goal and England's fourth - are etched for posterity on the minds of England fans everywhere. Own a piece of sporting history This magnificent, full-colour print of English football's most successful side ever - Alf Ramsey's 'Wingless Wonders' - has been individually signed by no less than eight members of the World Cup-winning team. Personally signed World Cup stars Roger Hunt, Martin Peters, Gordon Banks, Geoff Hurst, Jack Charlton, Alan Ball, George Cohen and Ray Wilson have each personally signed each of the 1000 prints in this edition. Each print is accompanied by a Certificate of Authenticity. Strictly limited edition Only 1000 copies of this print have been produced and once these have sold out, no more will ever be released.
More Information
Reviews
Write Your Own Review
Only registered users can write reviews. Please Sign in or create an account
To Top