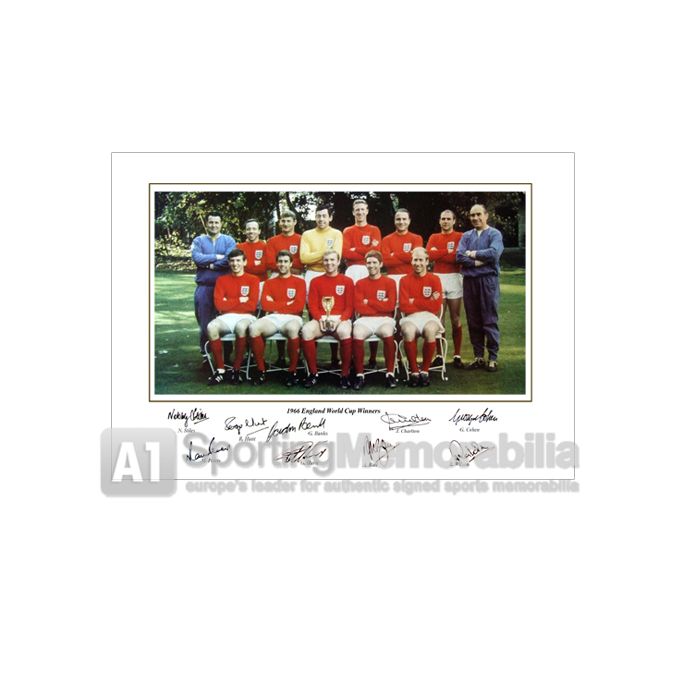 Details
English football's finest moment came in 1966 when Sir Alf Ramsey's 'wingless wonders' beat West Germany in the World Cup final at Wembley and the country that had invented the beautiful game were crowned world champions. It was a match that has become part of the social, let alone sporting fabric of the whole nation and made heroes of the players who donned the famous white shirt that day and beat the Germans in a dramatic contest that went into extra-time and took everyone who witnessed it on a 120-minute long emotional rollercoaster. Many still consider the game the greatest final in World Cup history and the controversy over whether England's third goal in extra time from Sir Geoff Hurst crossed the goal line still rages to this day. West Germany took the lead at Wembley through a Helmut Haller header but England were level seven minutes later when Hurst latched onto to Bobby Moore's freekick and scored. It was to 2-1 to Ramsey's team 13 minutes before the end of the second-half when Martin Peters' fierce half-volley rippled the German net but English celebration were put on hold when Wolfgang Webber equalised with seconds to go and the match headed into extra time. Hurst's second goal and England's third was mired in controversy after Russian linesman Tofik Bakramov ruled the striker's instinctive shot had crossed the line but any doubts about England's victory were allayed when Hurst completed his hat-trick late on and Moore proudly climbed the steps to the Royal Box to collect the Jules Rimet trophy from The Queen. No sporting event has ever come close to eclipsing the delirious celebrations that followed England's 4-2 victory and the players who took to the field that day at Wembley will never be forgotten. Own a piece of sporting history England's 4-2 victory over West Germany in the 1966 World Cup final remains the greatest moment in the country's football history and made national heroes of the 11 players who ran out at Wembley that day. This beautiful print shows the squad in the wake of their legendary triumph and is a beautiful piece of sporting memorabilia. The image is personally signed by Sir Geoff Hurst, Nobby Stiles, Gordon Banks, Alan Ball, Roger Hunt, Ray Wilson, Martin Peters, Jack Charlton and George Cohen. Each 16x12 print is issued with a certificate of authenticity.
More Information
Reviews
Write Your Own Review
Only registered users can write reviews. Please Sign in or create an account
To Top