Be the first to review this product
Special Price £5.00 Regular Price £24.99
In stock
Product code
BBT043
Our limited edition shows the legendary Wigan winger diving over for a try whilst playing for the British Lions in Australia. One of the true greats of the professional code, Billy scored an astonishing 571 tries in 565 matches for club and country.
Approximate size:420mm x 594mm
Categories:Rugby, Rugby League, 80% Off Sale, Gifts Under £50
Dispatch time:Usually dispatched within 2-3 working days
Add to Wish List Add to Compare
Share
Facebook Twitter Pinterest
Hologram Certificate of Authenticity
Over 15 years verifiable history
100% authentic hand signed
Have a question? Call us 01202 406777
Skip to the end of the images gallery 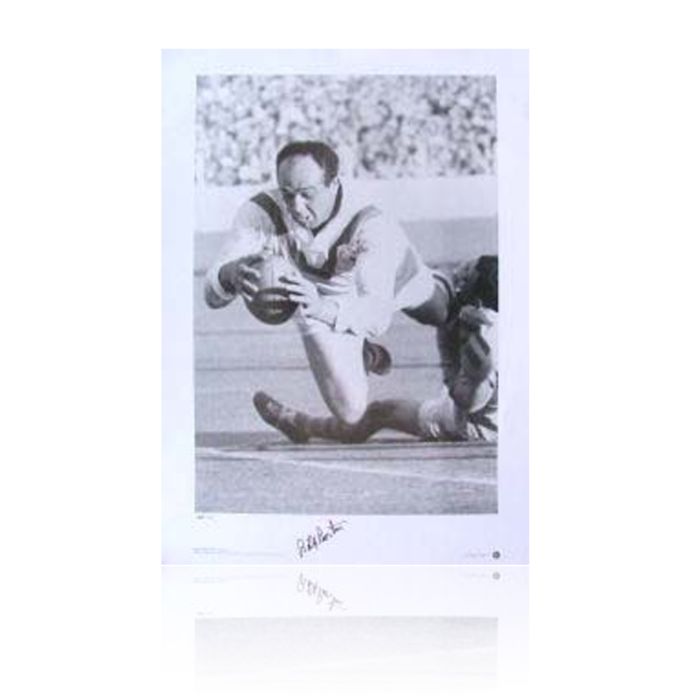 Details
In an illustrious career spanning three decades - from the 1950s to 1970 - Billy Boston established himself as one of the all-time greats of Rugby League, scoring an incredible 571 tries in 565 first class matches, and notching up his first century after only 68 matches. At the tender age of 19 he was picked for the 1954 Lions Tour in Australia after only six Rugby League games! After playing for Neath for a time, Boston was called up into National Service, which he served with the Royal Signals Corp at Catterick. It was here that the young Boston really cut his sporting teeth, joining a famous XV which beat all comers for a two-year period. The team included players of such stature as Phil Horrocks-Taylor, the future Rugby Union England fly half and provided the best possible initiation into the game. It was whilst he was playing for the Royal Signals that he came to be noticed by Wigan. They sent four directors to watch the Army Cup Final at Aldershot in which the Signals beat the Welsh Guards. Boston more than lived up to his reputation that day, scoring six tries in a match which confirmed the extent of his talent. It was at Wigan that he matured as a player - he gradually put on muscle, making his six-foot frame even more formidable, but never lost any of his trademark agility. He went to Wembley on six occasions wearing the cherry and white, three of those times returning with the trophy. His blockbusting aggression, coupled with his good nature, made him an instant and lasting hit with the Wigan fans. Own a piece of sporting memorabilia The first black Rugby League player ever to play for England, Billy Boston is one of the sport's most distinguished ambassadors. Any Wigan Rugby League fan would be proud to own this nostalgic, black and white print of their sporting hero, Billy Boston. Personally signed Billy Boston, Rugby League's most esteemed veteran, has personally signed each of the 500 prints in this limited edition. Strictly limited edition Only 500 of this print have been produced. Once these have been sold, no more will ever be released.
More Information
Reviews
Write Your Own Review
Only registered users can write reviews. Please Sign in or create an account
To Top