Be the first to review this product
£29.99
Out of stock
Product code
A1836
Outstanding colour print of Manchester United celebrating their 1985 FA Cup Final win over Everton - signed by goalscorer Norman Whiteside and captain Bryan Robson.
Categories:Football, Manchester United, Bryan Robson, Norman Whiteside, Gifts Under £50
Dispatch time:Usually dispatched within 2-3 working days
Notify me when this product is in stock
Add to Wish List Add to Compare
Share
Facebook Twitter Pinterest
Hologram Certificate of Authenticity
Over 15 years verifiable history
100% authentic hand signed
Have a question? Call us 01202 406777
Skip to the end of the images gallery 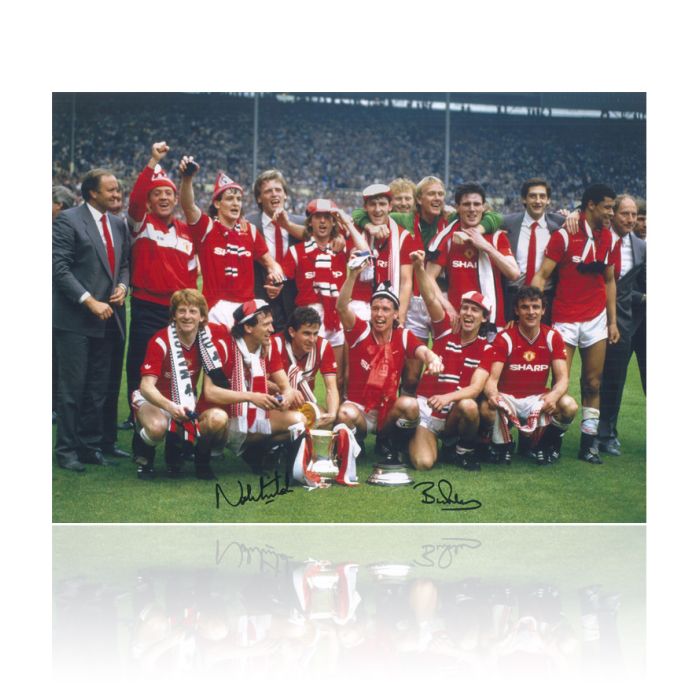 Details
One of the most naturally-gifted players of his generation, Norman Whiteside's playing career came to a premature and cruel end at the age of 26 but in his nine years of professional football, the Northern Ireland midfielder shone for both club and country. A precocious talent, Whiteside broke into the Manchester United side as a teenager and he featured for Northern Ireland in the World Cup finals of 1982 in Spain and in the process broke Pele's record as the youngest player ever to appear in the tournament when he was selected to face Yugoslavia at the age of 17 years and 41 days. He also played in the finals in Mexico four years later and at club level helped United lift the FA Cup in both 1983 and 1985, scoring a stunning winning goal at Wembley against Everton in his second final appearance. Whiteside played more than 273 games for United, scoring 66 goals, but a knee injury plauged his later years and in 1989 he signed for Everton and spent two seasons at Goodison before he was forced to hang up his boots. The longest-serving skipper in Manchester United's history, Bryan Robson was the embodiment of an all-action, dynamic midfielder who played 90 times for England during an illustrious career that saw him earn the affectionate nickname 'Captain Marvel'. Born in Chester-Le-Street in 1957, he began his professional career with West Bromich Albion in 1974 and spent seven seasons with the Baggies before United lured to him Old Trafford for a British record transfer fee of £1.5 million in October 1981. He made his debut for the Red Devils against Spurs in a League Cup clash six days later and it was to prove the start of a mutual love affair between the player and club which lasted 13 years. Robson went on to make 345 league appearances for United, scoring 74 times, and he was a mainstay of the side that claimed back-to-back Premier League titles in 1993 and 1994, as well as four FA Cups, a League Cup and the 1991 Uefa Cup Winners' Cup. At international level, the midfielder made his England debut in a 2-0 victory over the Republic of Ireland at Wembley in February 1980 in a European Championship qualifier and scored his first goal for his country the following year in a 2-1 defeat against Norway in Oslo. His goal after just 27 seconds against France in the World Cup Finals in 1982 earned him a place in the record books for 20 years for the fastest goal in the tournament's history and in November that year he captained England for the first time against Greece. Robson scored a total of 26 times for England during an international career that spanned 11 years and ended his playing days with Middlesbrough in 1996 before managerial stints with Boro, Bradford, West Brom and Sheffield United. Own a piece of sporting history Manchester United shocked league champions Everton by winning the 1985 FA Cup Final 1-0 thanks to Norman Whiteside's fabulous winning goal. This excellent colour print shows the team celebrating that famous triumph and is hand-signed by Whiteside and Robson. Each print also comes with a certificate of authenticity.
More Information
Reviews
Write Your Own Review
Only registered users can write reviews. Please Sign in or create an account
To Top