Be the first to review this product
£34.99
Out of stock
Product code
A1205
Stunning black and white print of Denis Law in Manchester City colours, signed by the legendary Scottish striker.
Categories:Football, Manchester City, Denis Law, Gifts Under £50
Dispatch time:Usually dispatched within 2-3 working days
Notify me when this product is in stock
Add to Wish List Add to Compare
Share
Facebook Twitter Pinterest
Hologram Certificate of Authenticity
Over 15 years verifiable history
100% authentic hand signed
Have a question? Call us 01202 406777
Skip to the end of the images gallery 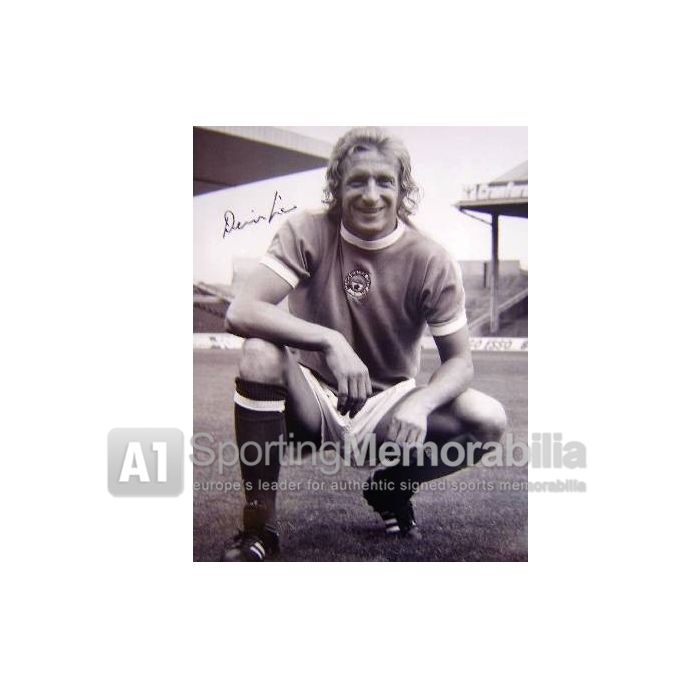 Details
Born in Aberdeen in 1940, Denis Law began his professional career in the 1950s with Huddersfield Town but it was in the blue of Manchester City and then the red of Manchester United that the striker was to forge his reputation as one of Europe's finest and most entertaining talents. Law scored signed for City in March 1960 for a then record British transfer fee of £55,000 and although he his first spell at Maine Road was to last for just one season before joining Italian side Torino, he scored 21 goals in just 44 games. United signed him from Torino for another record fee of £115,000 in 1962 and the Scotsman quickly found Old Trafford very much to his liking and he quickly became one of the undisputed stars of what is still widely regarded as one of the great Manchester United sides. Law scored 29 goals in 44 games in his first season with the Red Devils and it was not long before the silverware followed. The 1963 FA Cup victory over Leicester City was his first taste of success but greater things were to come as the Red Devils claimed the old First Division title in 1965 and 1967. Capped 55 times by Scotland, Law became the first and to date only Scot to be named European Footballer of the Year in 1964 and although injury denied him a place in the final of the 1968 European Cup final and the side's famous victory over Benfica, he remains one of the most popular players in United history. His Old Trafford career finally came to an end in 1973 but he left boasting a record of 236 goals in 409 appearances for the club and countless memories of his infectious talent. He resigned for City in 1973 and in another one-season spell for the Citizens and he scored nine times in 24 appearances, famously scoring with an impudent back hell in the final game of the campaign against United to confirm his former side's relegation. Law was inducted into the English Football Hall of Fame in 2002 and the following year he was voted Scotland's outstanding player of the past 50 years. Own a piece of sporting history Denis Law is quite simply one of the great players ever to grace the English game and is one of the few footballers to have played for Manchester United and Manchester City with equal distinction and adoration from the terraces. The print is personally signed Law himself and is a stunning piece of City memorabilia that commemorates the career of one of the game's greatest entertainers. Each print is issued with a certificate of authenticity.
More Information
Reviews
Write Your Own Review
Only registered users can write reviews. Please Sign in or create an account
To Top