Be the first to review this product
£194.99
Out of stock
Product code
ART005
For any England fan, arguably the most infamous moment in international football, Maradona's Hand of God will remain a talking point for years to come. This stunning print captures the very moment Diego Maradona sent the ball past Peter Shilton to score the first of his famous brace in Argentina's 1986 World Cup quarter final victory over England. Both Maradona and Peter Shilton have personally signed 500 copies of this print making it a truly essential purchase and highly collectable.
Approximate size:16 x 23 inches
Categories:Football, England, Football Legends, Diego Maradona, World Cup, Peter Shilton
Dispatch time:Usually dispatched within 2-3 working days
Notify me when this product is in stock
Add to Wish List Add to Compare
Share
Facebook Twitter Pinterest
Hologram Certificate of Authenticity
Over 15 years verifiable history
100% authentic hand signed
Have a question? Call us 01202 406777
Skip to the end of the images gallery 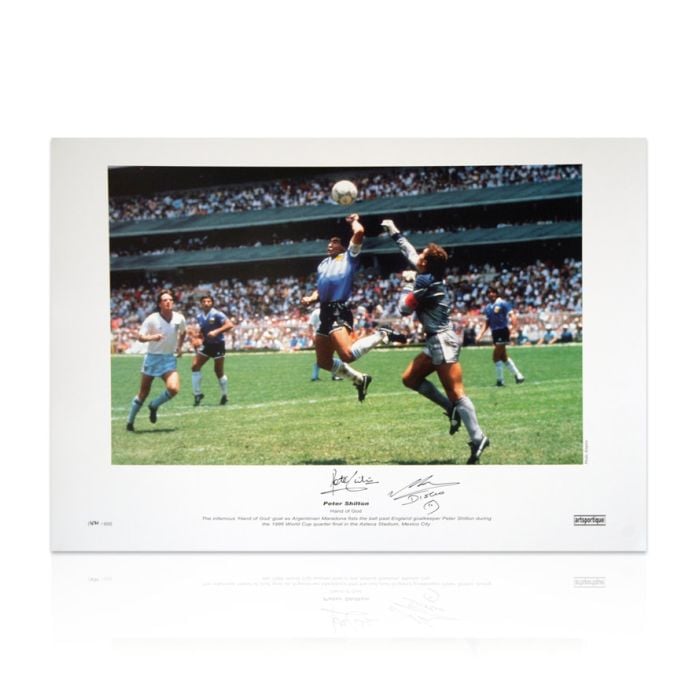 Details
This stunning limited edition print features the infamous moment when Diego Maradona used 'the hand of god' to score the opening goal in the 1986 World Cup quarter final between Argentina and Engkland.. This highly collectable item been personally signed by Maradona and Shilton and is a strictly limited edition of just 500. Early ordering is essential on this superb piece of memorabilia. Own a piece of sporting history Diego Armando Maradona. A name that will forever be etched in football's history. Quite simply one of the greatest players ever to grace a football field and 1986 was his zenith. Throughout the tourament, Maradona asserted his dominance and was acknowledged as the best player of the tournament. However, it was the two goals he scored in the quarter-final game against England which cemented his legend. Action replay footage showed that the first goal was scored with the aid of his hand. He later claimed it was the "Hand of God" and described it as "A little of the hand of God, and a little of the head of Maradona," implying that God was ultimately responsible for the goal, because the referee had missed the handball. However, on 22 August 2005 Maradona acknowledged on his television show that he hit the ball with his hand purposely and that he immediately knew the goal was illegitimate. He recalled thinking right after the goal that "I was waiting for my teammates to embrace me, and no one came . . . I told them, 'Come hug me, or the referee isn't going to allow it." In contrast, however, Maradona's second goal was an uncontroversial and impressive display of footballing skill. He ran half the length of the pitch, passing five English players (Glenn Hoddle, Peter Reid, Kenny Sansom, Terry Butcher, and Terry Fenwick) as well as goalkeeper Peter Shilton. This goal was voted Goal of the Century in a 2002 online poll conducted by FIFA. Argentina went on to defeat England 2-1 in that game. He followed this with another miraculous goal in the semi-final against Belgium. In the final the opposing German side attempted to subdue him by double-marking but he nevertheless found the space to lay on the winning goal for Jorge Burruchaga. Argentina won the World Cup and Maradona's legend was secured. The rarity of his signature ensures this item's collectability and offers sound investment potential. Early ordering is very much advised.
More Information
Reviews
Write Your Own Review
Only registered users can write reviews. Please Sign in or create an account
To Top