Be the first to review this product
£249.99
Out of stock
Product code
A1317
Beautifully framed print of Old Trafford alongside image of Eric Cantona at his peak, signed by the Manchester United legend himself.
Categories:Football, Football Legends, Manchester United, Eric Cantona
Dispatch time:Usually dispatched within 8-10 working days
Notify me when this product is in stock
Add to Wish List Add to Compare
Share
Facebook Twitter Pinterest
Hologram Certificate of Authenticity
Over 15 years verifiable history
100% authentic hand signed
Have a question? Call us 01202 406777
Skip to the end of the images gallery 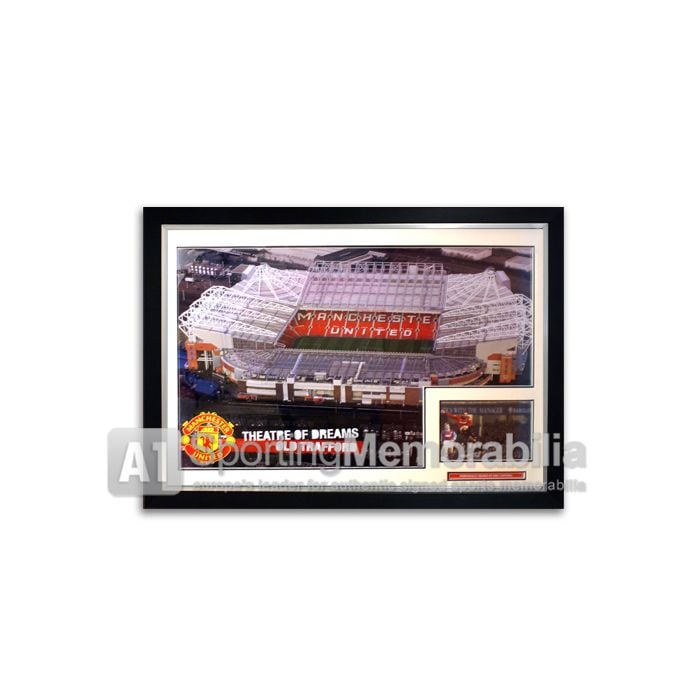 Details
Controversial, charismatic and supremely confident, Eric Cantona is revered as one of the greatest players in Manchester United's illustrious history by the Old Trafford faithful and the French maverick remains one of the most outrageously talented imports to have graced the English game. Born in Marseille in 1966, he began his career with Auxerre as a teenager. Stints at Marseille and Nimes followed before he crossed the Channel in 1991 when he signed for Leeds United. His time at Elland Road was shortlived and after just nine months Sir Alex Ferguson stunned the football fraternity when he took Cantona across the Pennines and made him a United player. The £1.2 million the club invested to secure his services was to prove one of the bargains of the decade. Cantona's arrival in Manchester was the catalyst for United's great revival. The club had not won the top-flight title for more than a quarter of a century but with the mercurial French striker in the ranks, United's luck was about to change and they were crowned the first ever Premiership champions in 1993. Cantona's cult status was already assured. Over the next four seasons, United and Cantona claimed another three Premiership titles, as well as two FA Cups in 1994 and 1996, and the individual accolades soon followed. In 1994 he was named the PFA Player of the Year and in 1996 he was voted the Football Writers' Association Player of the Year. Cantona finally hung up his boots at the end of the 1996-97 campaign at the age of 30. His legacy however lives on and he will forever be remembered at Old Trafford and beyond for his unique skill, occasionally impenetrable public statements and distinctly French outlook on life. Own a piece of sporting history Eric Cantona spent six glorious seasons at Old Trafford in the 1990s and became one of the most popular, controversial and influential players in the club's history. Each framed print is personally signed by Cantona himself and is a unique piece of Manchester United memorabilia that celebrates the Theatre of Dreams. Each print is issued with a certificate of authenticity.
More Information
Reviews
Write Your Own Review
Only registered users can write reviews. Please Sign in or create an account
To Top