Be the first to review this product
£299.99
Out of stock
Product code
A1355
Amazing framed montage of George Best's Manchester United career, featuring a hand-signed photograph signed by Best himself.
Categories:Football, Football Legends, George Best, Manchester United
Dispatch time:Usually dispatched within 8-10 working days
Notify me when this product is in stock
Add to Wish List Add to Compare
Share
Facebook Twitter Pinterest
Hologram Certificate of Authenticity
Over 15 years verifiable history
100% authentic hand signed
Have a question? Call us 01202 406777
Skip to the end of the images gallery 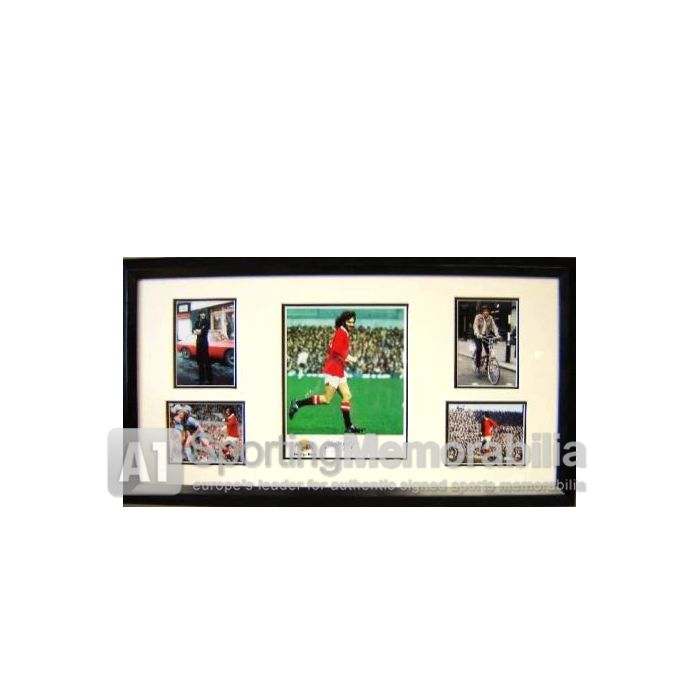 Details
George Best's natural impudence, undisputed elegance and innate flair made him pure box office as a player and during his 11 iconic years at Old Trafford with Manchester United he lit up English football in a way that few players before or after him could aspire to. Born in Belfast in 1946, Best was spotted by a United scout at the age of 15 and quickly handed a trial. Just two years later he made his first team debut for the Red Devils against West Bromich Albion and the legendary Best story had well and truly begun. Still a teenager, Best was part of the United side that claimed the 1964-65 First Division title and two seasons later, they were to be crowned champions once again. However 1968 was to see the Northern Irishman at the absolute peak of his powers. United were dethroned as league champions by old rivals Manchester City but the disappointment was swept aside as Matt Busby's famously side beat Benfica 4-1 in the European Cup final at Wembley after extra-time to became the first English side to become the kings of Europe. Best was one of United's scorers against Benfica and his sensational performances throughout the year saw him voted the European Footballer of the Year and was also named the Football Writers' Association Footballer of the Year. The winger was to spend six more years at Old Trafford before he stunned the football world in 1974 when he decided to quit the club at the age of 27. His legacy, however, was already assured. Best had made 466 first team appearances and 178 goals for United - finishing as the side's top scorer in six separate seasons - and entertained millions in the process in his own unique way. Own a piece of sporting history The late, great George Best will forever be remembered as one of the best footballers that ever lived, and his time at Old Trafford with Manchester United is quite rightly lauded as one of the finest times in the history of the club. This outstanding framed montage celebrates Best's wonderful career with United, highlighting his effervescent character as well as his amazing ability. The action shot in the centre is personally hand signed by Best himself making it a fabulous piece of football memorabilia. Each framed montage comes with a certificate of authenticity.
More Information
Reviews
Write Your Own Review
Only registered users can write reviews. Please Sign in or create an account
To Top