Be the first to review this product
£64.99
Out of stock
Product code
BBT157
Limited edition print personally signed by Olympic Gold medalist Linford Christie. This is an exclusive piece of memorabilia, signed by Britain's fastest man, as he claimed the 100m gold medal at the 1992 Barcelona Olympics.
Approximate size:420mm x 594mm
Categories:Other Sports, Olympics
Dispatch time:Usually dispatched within 2-3 working days
Notify me when this product is in stock
Add to Wish List Add to Compare
Share
Facebook Twitter Pinterest
Hologram Certificate of Authenticity
Over 15 years verifiable history
100% authentic hand signed
Have a question? Call us 01202 406777
Skip to the end of the images gallery 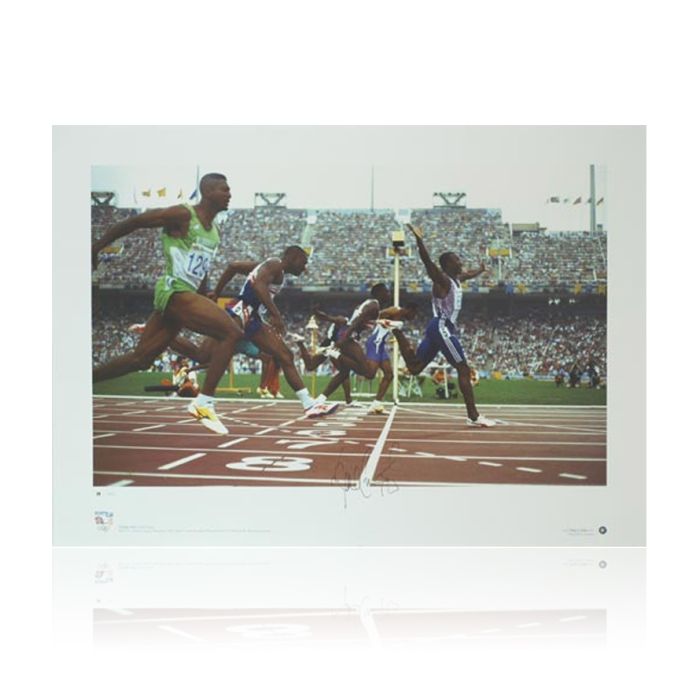 Details
The fastest Britain ever, Linford Christie storms across the line to take gold in the 100 metres at the Barcelona Olympics in 1992. In front of a packed Olympic stadium, Christie secured his place in the pantheon of legendary British athletes. The joy on his face is unmistakable, the reward for a lifetime of dedication to his sport. Linford had already won an Olympic silver medal at Seoul in 1988 and was determined to go one better four years later. The big threat to Linford in '92, however, was one Leroy Burrell. Built like a bulldozer, he had defeated Christie no less than 10 times prior to Barcelona. In the Olympic 100m quarter final Christie got the better of him but Burrell recovered to edge out Christie in the semi-final. Going into the final, the pair were inseparable. Each athlete told a very different story on the start line on final day: Burrell, edgy and nervous; Christie, extraordinarily focused, hands at sides, staring straight down the track to a point one metre beyond the finishing line. This was Linford's trademark. If any athlete ever won a race before the start it was Christie. At the start gun, Burrell false started. At the second attempt, he was too far out of the race to compete and, with 40 metres remaining, Christie surged ahead and closed out the race. Linford was the first European to run under the magical 10-second mark and the following year, in 1993, at the Stuggart World Championships, he recorded a personal best of 9.87 seconds, a mere one hundredth of a second outside the World Record. Christie's was an illustrious career and no European has ever run faster. Own a piece of sporting history As Linford said many times, "Records can be broken, but medals are forever." Now you can own an incredible, exclusive collector's piece of Linford Christie's greatest triumph - winning 100m gold at the 1992 Olympic Games. Personally signed Each print has been personally hand-signed by Linford Chrisitie. Due to our exclusive deal with the British Olympic Association, Linford's autograph is very rare and highly collectable. Strictly limited edition Only 500 hand-numbered copies of this print will ever be released. The massive appeal of superstar sprinter Linford Christie means early ordering is essential.
More Information
Reviews
Write Your Own Review
Only registered users can write reviews. Please Sign in or create an account
To Top