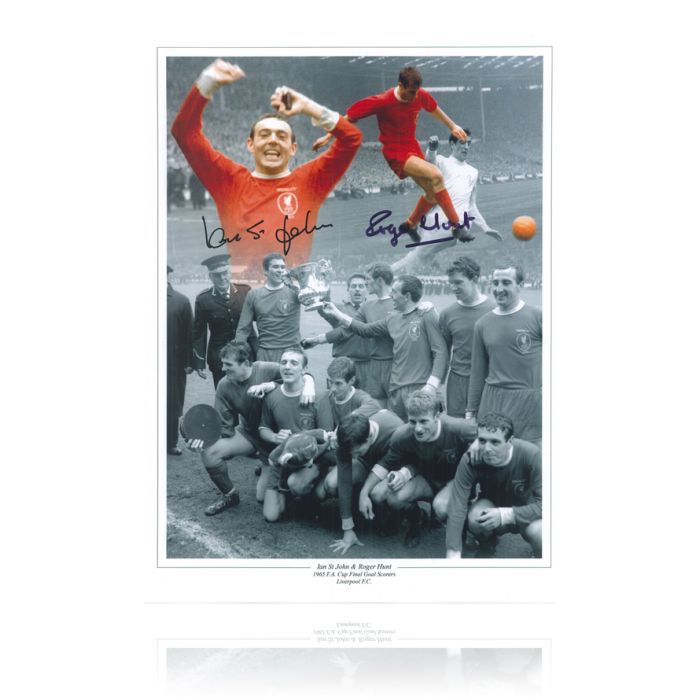 Details
One of Anfield's favourite sons, Roger Hunt formed a formidable strike partnership with Ian St John for Liverpool through the 1960s and between them they scored an incredible 340 league goals in a decade that saw the club lay the foundations of the famous boot room dynasty. Hunt was signed by manager Phil Taylor in July 1958 but it was under the coaching regime of Bill Shankly that he blossomed, scoring on his debut against Scunthorpe in an old Second Division clash in 1959. It was to prove the first of many for the prolific Lancashire-born striker and through the decade he was to finish as Liverpool's leading marksmen for eight consecutive seasons. Together Hunt and St John were one of the most feared and respected partnerships in the English game and their combined goals helped Liverpool claim two First Division titles and the FA Cup. His finest hour, however, came in England colours. Hunt played all six games of the triumphant World Cup campaign and was one of the 11 heroes who triumphed over West Germany at Wembley in the final, helping the country lift the Jules Rimet trophy. After impressing as a young striker at his hometown club Motherwell, Ian St John was signed by Liverpool for a club record £37,500 in 1961 - and the striker quickly established himself as a key figure at Anfield, scoring a hat-trick on his debut and notching 18, 19 and 21 goals in his first three seasons on Merseyside. During ten successful seasons at Liverpool, "The Saint" won two League Championship winners medals, an FA Cup winner's medal (when he scored the winner in 1965) and a Second Division winner's medal. His record at Anfield when he left for Coventry City in 1971, stood at 118 goals in 424 appearances. He also won 21 Scotland caps, scoring nine goals. Often still seen at Anfield, St John remains of the most popular players to have ever represented the club. Own a piece of sporting history Roger Hunt and Ian St John were the extra-time heroes for Liverpool when beating Leeds United 2-1 in the 1965 FA Cup Final. This stunning montage print is signed by both star strikers and is a terrific piece of football memorabilia. Each print also comes with a certificate of authenticity.
More Information
Reviews
Write Your Own Review
Only registered users can write reviews. Please Sign in or create an account
To Top