Be the first to review this product
£3,499.99
Out of stock
Product code
A3549
Outstanding Everlast gloves hand signed by both Muhammad Ali & Henry Cooper and beautifully framed and mounted with a mirror image print of the iconic boxing moment when Henry Cooper knocked down Muhammad Ali.
Categories:Boxing, Sir Henry Cooper, Muhammad Ali
Dispatch time:Usually dispatched within 8-10 working days
Notify me when this product is in stock
Add to Wish List Add to Compare
Share
Facebook Twitter Pinterest
Hologram Certificate of Authenticity
Over 15 years verifiable history
100% authentic hand signed
Have a question? Call us 01202 406777
Skip to the end of the images gallery 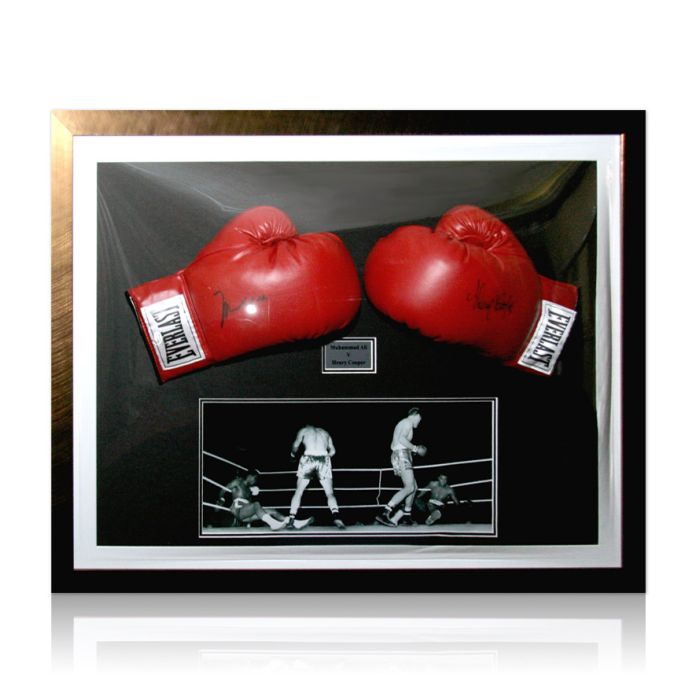 Details
About Sir Henry Cooper Sir Henry Cooper is one of British sport's most popular and charismatic personalities of the past century and even today, some 35 years after he hung up his gloves for the final time, 'Our Enry' remains a national icon. Born in south London in 1934, Cooper grew up in the shadow of the Second World War and displayed all the resolve and determination in the ring that his peers had to show in everyday life and by 1970 he was officially recognised as the British, European and Commonwealth heavyweight champion. It was however his two famous clashes with Muhammad Ali in the 1960s for which he is best and most fondly remembered. The two men first fought in a non-title fight at Wembley in 1963 and Cooper stunned the boxing fraternity when he floored Ali in the fourth round with 'Enry's Ammer' - his trademark left hook. A dazed Ali eventually picked himself up and won the fight but with one iconic punch, Cooper had engrained himself in the national consciousness. The rematch three years later was more one-sided as Ali confirmed his monicker as 'The Greatest' but Cooper's reputation remained untarnished. He retired in 1970 after controversially losing to Joe Bugner on points but is still regarded as one of our greatest ever heavyweights and held the British title for 12 years. Cooper was named the BBC Sports Personality of the Year in both 1967 and 1970 and he was knighted by The Queen in 1999. About Muhammad Ali Cassius Marcellus Clay Jnr was born in Louisville, Kentucky on January 17th 1942 and it quickly became apparent during his childhood that he had a phenomenal natural talent for boxing. After a glittering amateur career Clay came to world prominence for the very first time at the 1960 Olympics in Rome where he landed a gold medal for the United States of America in the Light-Heavyweight division. Soon after, Clay turned professional and made rapid strides in the sport catching the eye with his incredible speed and strength. Famous wins over Doug Jones and Britain's Henry Cooper in 1963 cemented the 'Lousville Lip' as a serious contender for the world heavyweight crown. Clay's first shot at the world title came in 1964 when he faced the legendary Sonny Liston in Miami, Florida - sensationally stopping the champion at the end of six fascinating rounds. Now the champion, Clay's religious beliefs and allegiance to the Nation of Islam instigated his change of name to Muhammad Ali - and over the next few years Ali continued to dominate the heavyweight division. In 1967 after refusing to fight in the Vietnam War on religious grounds Ali was stripped of his title and banned from boxing for three years. In March 1971 Ali fought Smokin' Joe Frazier at Madison Square Garden in what was described as the 'Fight of the Century'. It was a fight Ali lost on points - his first professional loss. Ali avenged that defeat in a stunning rematch three years later. Ali finally regained his world title in 1974 defeating the seemingly invincible George Foreman in the 'Rumble in the Jungle'. A string of successful defences followed before Ali met Frazier for a third time in the ring, in a magnificent fight that was dubbed the 'Thrilla in Manilla'. A brutal bout ended when Frazier refused to leave his stool at the start of the 15th and final round. In 1978 Ali lost his title to Olympic champion Leon Spinks but he was to once again avenge that loss within the same year - but signs of his deteriorating health were already beginning to show. Ali was officially diagnosed with Parkinson's Sydrome in 1984 but despite his ill health he has remained a beloved and active public figure. Muhammed Ali is regarded as the greatest heavyweight champion of all-time and in a recent British poll was also voted greatest sportsman ever. Own a piece of sporting history These extremely rare signed gloves together in a stunning framed are hand-signed by Ali & Cooper and are an amazing piece of boxing memorabilia. The signed gloves come with a certificate of authenticity. Each Muhammad Ali item also comes with its own individual OnlineAuthentics.com authentication. Entering this unique code online will display a photo of the item, the date it was signed, the item type and original origin.
More Information
Reviews
Write Your Own Review
Only registered users can write reviews. Please Sign in or create an account
To Top