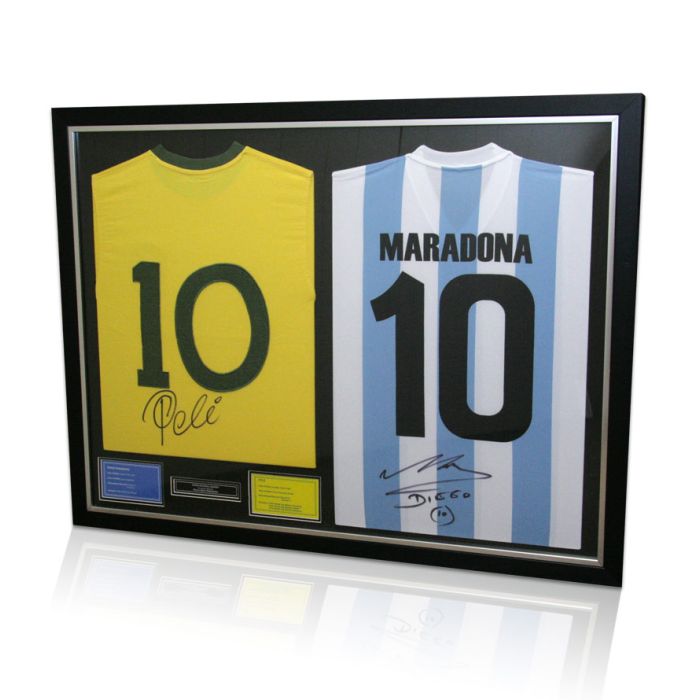 Details
When Edson Arantes do Nascimento was born in the Brazilian town of Tres Coracoes in October 1940, no-one could have predicted the phenomenal impact he would go on to have on the beautiful game. Football would never be quite the same again. Pele - as he became known at school - remains the game's greatest ever player more than 30 years after he finally hung up his famous boots and while rivals to his crown have come and gone, he is and will forever be the king of football. Signed at a young age by Santos, Pele burst onto the international stage as 17-year-old at the 1958 World Cup in Sweden, scoring twice in Brazil's final triumph against the hosts. The first chapter in the Pele legend had already been written but there were many more iconic moments to follow. Injury denied him the chance to play in a second World Cup final in 1962 after scoring in the tournament opener against Mexico but he was back on the biggest stage of them all eight years later to lead Brazil to another famous victory. Many consider the 1970 Brazilian side the greatest team in the history of the game. Pele was the captain and heartbeat of the side and in the final he scored the first goal and set up two more as the South Americans crushed the Azzurri 4-1 in what is widely regarded as the best performance ever in a World Cup final. Brazil's third World Cup triumph ensured they were to keep the famous Jules Rimet trophy indefinitely and Pele's place in football folklore was assured. He finally retired from the game in 1977 after playing for New York Cosmos. He had played 92 times for his country, won three World Cup and scored over a thousand career goals. No-one has ever come close to eclipsing him. At his peak, Diego Armando Maradona was one of the greatest players ever to grace a football field and for many the little Argentinean maestro is the only man worthy of being mentioned in the same breath as the legendary Pele. Born in Buenos Aries in 1960, Maradona grew up in poverty but his burning passion for the beautiful game was to prove his way out of the barrios and from the moment he made his professional debut for Argentinos Juniors as a precocious 15-year-old, it was obvious the diminutive midfielder was destined for greater things. Immensely powerful, fast and outrageously talented, Maradona forged a reputation in club football with Boca Juniors, Barcelona and then Napoli in Italy but it was to be one the international stage, and particularly in the World Cup, that he was to forge a reputation as a world-class superstar. First capped by his country at the age of 16 against Hungary, he played in the 1982 World Cup but it was four years later as Argentinean captain that he was to ensure his enduring place in football folklore. Maradona was simply sensational throughout the tournament in Mexico and although the infamous 'Hand of God' incident in the quarter-final will never be forgotten by England fans, his second goal was out of this world and was voted 'Goal of the Century' by fans on the Fifa website in 2002. Argentina went onto to beat West Germany in the final in 1986 to give Maradona the greatest moment of his career and although his later life has at times been overshadowed by controversy and ill health, he remains one of the iconic figures the game has ever produced. Own a piece of sporting history Pele and Diego Maradona are recognised as the two best footballers the world has ever seen. This astonishing framed product displays their iconic number 10 shirts and both have been hand signed by Pele and Maradona themselves. This is a magnificent piece of sports memorabilia. Each signed product comes with a certificate of authenticity.
More Information
Reviews
Write Your Own Review
Only registered users can write reviews. Please Sign in or create an account
To Top