Pele & Gordon Banks Signed Photo - The Greatest Save Ever

Be the first to review this product
£139.99
In stock
Only 4 left
Product code
TB1004
Superb photo celebrating the 'Save of the Century' when Gordon Banks denied Pele at the 1970 World Cup, signed by England's legendary goalkeeper and Pele. Personally hand signed by both Pele and Banks.
Approximate size:14 X 20 INCHES
Categories:Football, England, Football Legends, Pele, Gordon Banks, World Cup, Brazil, All Products
Dispatch time:Usually dispatched within 2-3 working days
Add to Wish List Add to Compare
Share
Facebook Twitter Pinterest
Hologram Certificate of Authenticity
Over 15 years verifiable history
100% authentic hand signed
Have a question? Call us 01202 406777
Skip to the end of the images gallery 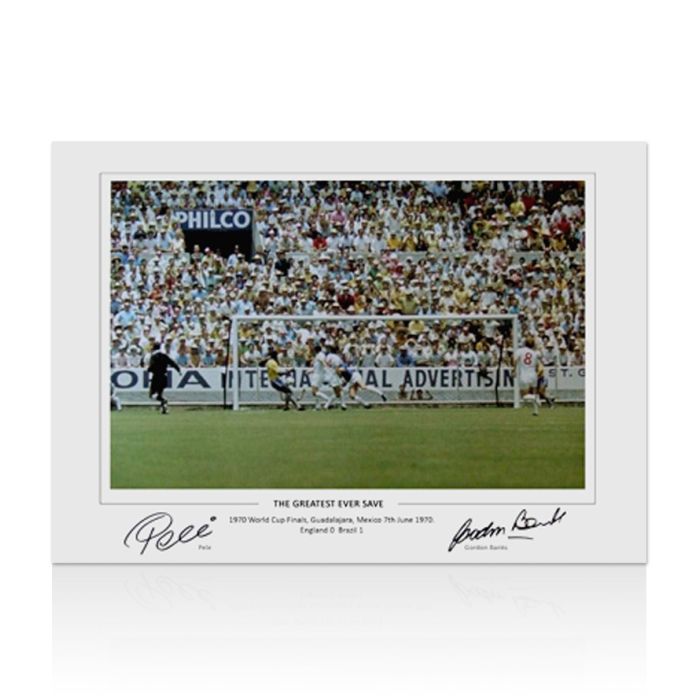 Details
Gordon Banks was one of the finest players of his generation and to this day he remains one of the greatest ever goalkeepers the game of football has ever produced. He began a career that was to span three decades with his local colliery side in Sheffield and made his professional debut with Chesterfield in the 1950s. He went on to make over 300 appearances for Leicester City and also played more than 200 senior games with Stoke. It was however with England that he forged his worldwide reputation. First capped by Sir Alf Ramsey against Scotland at Wembley in 1963, Banks quickly established himself as first choice for his country. He was one of the first names on Ramsey's team sheet by the time of the 1966 World Cup finals and he kept three successive clean sheets as England completed the group phase unbeaten. He was finally beaten by a Eusebio penalty in the 2-1 semi-final victory over Portugal and although he conceded two in the famous final against West Germany, it mattered little as England were crowned world champions. Banks was still England's number one at the 1970 World Cup and although the side's defence of their crown was ultimately unsuccessful, he reaffirmed his status as a goalkeeping legend with his famous save from Pele's header in the group phase clash with the Brazilians in Mexico. Jairzinho delivered an inviting cross from the right wing which bypassed the English centre halves, Pele rose majestically in the air and Banks seemed destined to be beaten as he scampered despairingly across his goal in Guadalajara. Pele's header was perfect - firm and downwards - but Banks somehow managed to tip the ball over the crossbar. Pele, and the crowd, were simply stunned. Banks played his final game for England in 1972 after 73 caps but his professional career was ended prematurely after he lost sight in his right eye following a car crash the same year. He was inducted into the English Football Hall of Fame in 2002. When Edson Arantes do Nascimento was born in the Brazilian town of Tres Coracoes in October 1940, no-one could have predicted the phenomenal impact he would go on to have on the beautiful game. Football would never be quite the same again. Pele - as he became known at school - remains the game's greatest ever player more than 30 years after he finally hung up his famous boots and while rivals to his crown have come and gone, he is and will forever be the king of football. Signed at a young age by Santos, Pele burst onto the international stage as 17-year-old at the 1958 World Cup in Sweden, scoring twice in Brazil's final triumph against the hosts. The first chapter in the Pele legend had already been written but there were many more iconic moments to follow. Injury denied him the chance to play in a second World Cup final in 1962 after scoring in the tournament opener against Mexico but he was back on the biggest stage of them all eight years later to lead Brazil to another famous victory. Many consider the 1970 Brazilian side the greatest team in the history of the game. Pele was the captain and heartbeat of the side and in the final he scored the first goal and set up two more as the South Americans crushed the Azzurri 4-1 in what is widely regarded as the best performance ever in a World Cup final. Brazil's third World Cup triumph ensured they were to keep the famous Jules Rimet trophy indefinitely and Pele's place in football folklore was assured. He finally retired from the game in 1977 after playing for New York Cosmos. He had played 92 times for his country, won three World Cup and scored over a thousand career goals. No-one has ever come close to eclipsing him. Own a piece of sporting history Brazil beat England 1-0 at the 1970 World Cup in Mexico but the defending champions could have suffered a heavier defeat had it not been for Gordon Banks unbelievable save from a Pele header that seemed destined to find the back of the net. Somehow Banks managed to tip the ball over the crossbar and this stunning print celebrates the iconic moment in Guadalajara when one of the world's greatest goalkeepers denied the world's greatest ever player with what became known as the 'Save of the Century'. The print is personally signed Banks himself and is a stunning piece of sporting memorabilia that remembers a truly iconic moment of World Cup history. Each print is issued with a certificate of authenticity.
More Information
Reviews
Write Your Own Review
Only registered users can write reviews. Please Sign in or create an account
To Top