Be the first to review this product
£224.99
Out of stock
Product code
A9643DFPF
Wayne Rooney hand-signed, authentic, pink Nike Mercurial football boot. This boot was personally hand-signed by current Everton striker, and former Manchester United and England captain, Wayne Rooney himself at a private and organised signing session for A1 Sporting Memorabilia on 20/10/2017. A clear signature is evident on the boot, which is signed in black permanent marker pen. Expertly framed in a bespoke dome display with quality black frame, two action pictures and descriptive plaque.
Approximate size:24 (W) x 20.5 (H) x 5 (D) inches
Categories:Football, Wayne Rooney, Everton, Football Teams, Framed Items, Gifts Under £300, Framed Signed Boots, All Products
Dispatch time:Usually dispatched within 8-10 working days
Notify me when this product is in stock
Add to Wish List Add to Compare
Share
Facebook Twitter Pinterest
Hologram Certificate of Authenticity
Over 15 years verifiable history
100% authentic hand signed
Have a question? Call us 01202 406777
Skip to the end of the images gallery 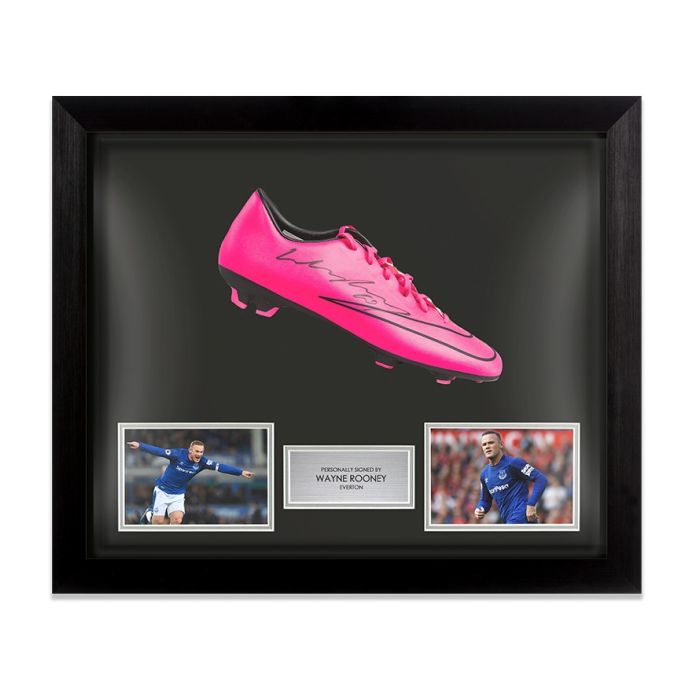 Details
England’s leading all-time top goalscorer and a true great of the game. If you think of a footballer who truly lit up a game during the 00’s, then Wayne Rooney is the first player that comes to mind. His hunger, tenacity and lethal ability in front of goal made him one of Europe’s most feared strikers. Rooney left his beloved Everton, after a stunning breakthrough couple of seasons, which saw him secure a mega-money and dream move to Manchester United in the summer of 2004. A League Cup trophy was secured in his second season at Old Trafford, where Rooney would go on to win three more for the club, but it was from 2007 onwards where the honours came flying in for Wayne and United. Three consecutive Premier League titles were picked up during the 2006/07, 2007/08 and 2008/09 campaigns – where United also got their hands on the UEFA Champions League during the 2007/08 season too, with a FIFA Club World Cup being added to an ever growing collection the year after. Two more League titles followed during the 2010/11 and 2012/13 season, with a first FA Cup coming his way in 2016. Rooney’s illustrious career in Manchester was coming to an end during the 2016/17 season, and in typical Rooney style, he led United to a first UEFA Europa League triumph. It was back to where he started this summer for Rooney, as he made an emotional return back to Goodison Park, and rejoined Everton to write another glamorous chapter in quite a stunning story thus far. Own a piece of sporting history Each Wayne Rooney signed boot is issued with a certificate of authenticity.
More Information
Reviews
Write Your Own Review
Only registered users can write reviews. Please Sign in or create an account
To Top