Be the first to review this product
£299.99
Out of stock
Product code
A3022
Beautifully presented boxing gloves signed by both boxing legends Ricky Hatton and Frank Bruno. Mounted in an impressive dome frame with the A1 Sporting Speakers promotional poster.
Approximate size:62cm x 92cm
Categories:Boxing, Ricky Hatton, Frank Bruno
Dispatch time:Usually dispatched within 8-10 working days
Notify me when this product is in stock
Add to Wish List Add to Compare
Share
Facebook Twitter Pinterest
Hologram Certificate of Authenticity
Over 15 years verifiable history
100% authentic hand signed
Have a question? Call us 01202 406777
Skip to the end of the images gallery 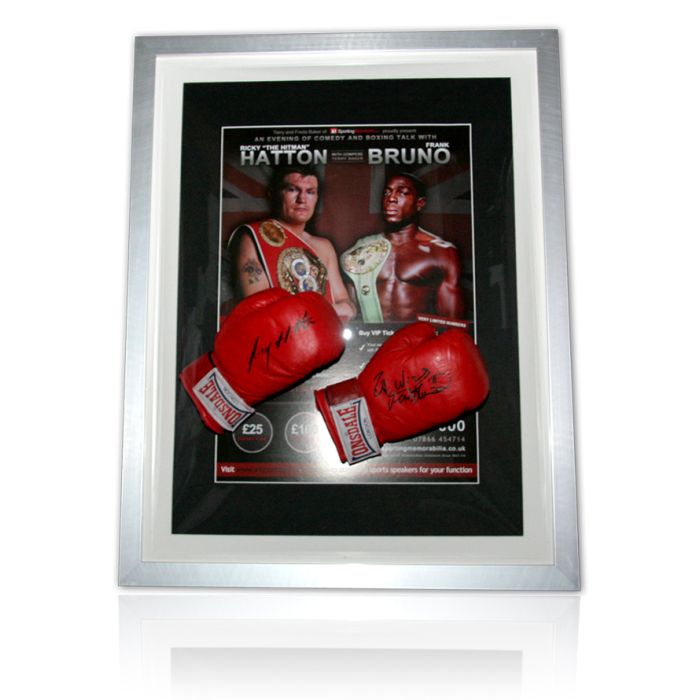 Details
Ricky Hatton One of the best British fighters of all time, Ricky Hatton is universally regarded as one of the best pound-for-pound boxers in the world and his all-action style has earned him a huge fan base in his native Manchester and far beyond. Nicknamed 'The Hitman' after Canadian wrestler Bret Hart, Hatton made a spectacular professional debut in 1997, knocking out Colin McAuley in the first round and his career has gone from strength to strength ever since. Famed for his fierce body shots, the Mancunian's greatest victory to date came against Australian Kostya Tszyu when the two fighters met to contest the IBF light welterweight crown in 2005. Tszyu was the defending champion and hot favourite but a sensational performance from Hatton saw The Hitman dethrone the Australian when he failed to come out for the 12th round. Hatton stepped up to welterweight in 2006 when he fought American Luis Collazo and took the WBA crown on points after a gruelling fight. He moved back to light welterweight in 2007 when he faced highly-rated Colombian Juan Urango and his points victory saw him recapture the unified IBF and IBO titles. His first and only professional defeat came later the same year when he was stopped in the 10th round by Floyd Mayweather Jnr in a welterweight world title fight in Las Vegas but Hatton remains one of the boxing world's most successful and popular fighters. Frank Bruno At the height of his powers, Frank Bruno was the most popular sportsmen in the country and to this day the former world heavyweight champion remains a national icon. Born in London in 1961, Bruno turned professional in 1980 and 21 consecutive wins by knockout quickly earned him a reputation as one of boxing's most entertaining and explosive fighters and it was not long before he had his first shot at a world title. In 1986 he challenged American Tim Witherspoon for the WBA title but despite leading the contest on all three judges' cards, he was knocked down in the eleventh round. His second chance came three years later against Mike Tyson and although he was eventually stopped in the fifth, Bruno won a legion of new fans with a juddering left hook in the first round that visibly rocked Tyson and gave the Londoner brief hope of pulling of a sensational shock. Bruno refused to give up on his dream of winning a world title and nine years after his clash with Witherspoon, the dream was realised. Bruno faced American Oliver McCall for the WBC belt and after 12 gruelling rounds that tested the stamina of both fighters to the limit, Bruno emerged the victor on points. He was finally a world heavyweight champion. His reign was to last for only one more fight as Tyson claimed the belt in Glasgow the following year. It was to be Bruno's last professional bout and he duly retired in 1996 with a proud record of 40 victories from 45 fights, 38 of those 40 wins coming by knockout. Own a piece of sporting history Ricky Hatton is one of the best fighters in the history of British boxing and his sensational 2005 victory over Kostya Tszyu is rated as one of the greatest fights of the last 20 years. Frank Bruno was a national icon during his 16-year long professional career and this glove commemorates the ever popular English heavyweight who claimed the WDC world title after beating Oliver McCall in 1995. The gloves are personally signed by Ricky Hatton and Frank Bruno and this is a impressive and unique piece of sporting memorabilia. Each item is issued with a certificate of authenticity.
More Information
Reviews
Write Your Own Review
Only registered users can write reviews. Please Sign in or create an account
To Top