Be the first to review this product
£229.99
Out of stock
Product code
A3530
Brand new Manchester United shirt hand signed by United legends Ryan Giggs and Paul Scholes. Signed at a private signing session by Ryan Giggs on 17/11/2010 and Paul Scholes on 12/11/2010 in Manchester.
Categories:Football, Manchester United, Ryan Giggs, Shirts, Signed Football Shirts, Manchester United, Paul Scholes
Dispatch time:Usually dispatched within 2-3 working days
Notify me when this product is in stock
Add to Wish List Add to Compare
Share
Facebook Twitter Pinterest
Hologram Certificate of Authenticity
Over 15 years verifiable history
100% authentic hand signed
Have a question? Call us 01202 406777
Skip to the end of the images gallery 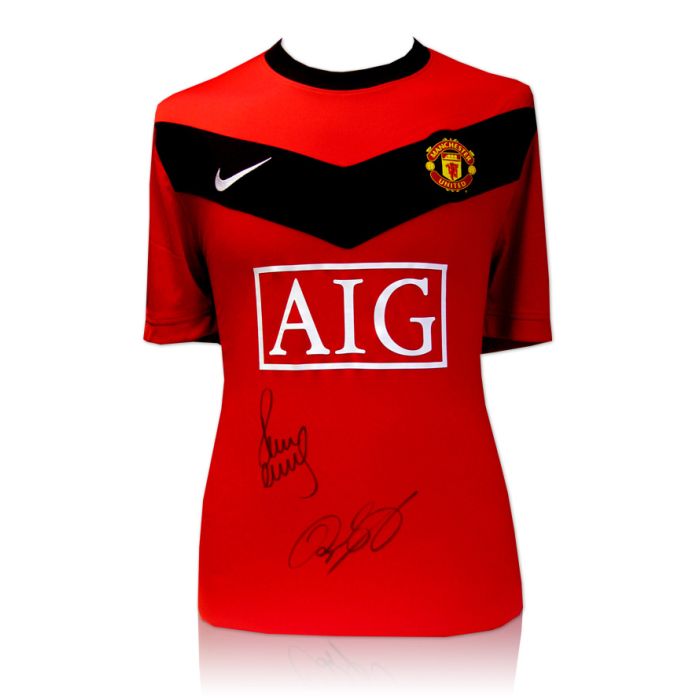 Details
About Ryan Giggs Ryan Giggs is the most decorated player in the history of Premier League football and although he is now in the twilight of a glittering career, the flying Welsh winger remains one of the most exciting and graceful talents ever to grace the English game. The Manchester United legend made his first team debut as substitute against Everton at Old Trafford in March 1991 and he has been a mainstay of United's dominance of English football ever since, accumulating more than 700 first team appearances and an unprecedented array of winner's medals. His first major honour came in 1992 when United lifted the League Cup after a 1-0 win over Nottingham Forest and he has go to help the Red Devils claim an incredible 11 Premier League titles, four FA Cups, a further League Cup and the 1999 and 2007 Champions League trophies. Pacey, superbly balanced and outrageously talented, Giggs' top-flight career has coincided with United's re-emergence as the dominant club in England and while other-class players have come and gone during the new golden era at Old Trafford, the left winger has endured and has eclipsed Sir Bobby Charlton's club record of 759 appearances in the famous red shirt. About Paul Scholes Widely regarded as the finest midfield playmaker of his generation, Paul Scholes has lit up the English game for more than 15 years with his sublime mix of vision, technical ability and spectacular goals and although he is now in the autumn of his career, he remains one of the most influential players in the Premier League. Born in Salford in 1974, Scholes began training with Manchester United at the age of 14 and signed turned professional in the summer of 1993. His first team debut came a little over a year later in a League Cup clash with Port Vale, in which he scored twice, and it was not long before the diminutive midfielder had established himself as a regular in the Old Trafford starting line-up. Scholes' emergence at United coincided with the club's renaissance as a major power in the English game and the silverware flowed as he matured into a world-class performer. To date, Scholes has played a part in eight Premier League title triumphs for the club, as well as three FA Cups and two League Cup. The low point of his career came in 1999 when he was ruled out of United's famous Champions League final victory over Bayern Munich through suspension but redemption was at hand eight years later when he proudly took to the field in Moscow as part of the United starting line-up that beat Chelsea on penalties. Scholes was born in Salford and grew up as an Oldham Athletic supporter, but has trained with Manchester United since the age of 14.[1] He then later joined as a trainee upon leaving the Cardinal Langley Roman Catholic High School, Middleton, Greater Manchester in the summer of 1991. In his final term at school, he was selected to represent Great Britain National Schools in football. Scholes was not a member of Manchester United's 1992 FA Youth Cup-winning squad that included future senior teammates David Beckham, Nicky Butt, Gary Neville and Ryan Giggs, but he was part of the youth team that reached the final in the following season, alongside Phil Neville . Scholes turned professional on 23 July 1993, but did not make his breakthrough into the senior squad until the 1994-95 season, when he made seventeen league appearances and scored five goals. His debut came on 21 September 1994, where he scored twice in a 2-1 victory over Port Vale F.C. in the Football League Cup. Scholes came on as a substitute in the 1995 FA Cup final against Everton, which United lost 1-0. Own a piece of sporting history This dual signed home shirt is personally signed Giggs and Scholes and is a stunning piece of rare sporting memorabilia. Each shirt is issued with a certificate of authenticity.
More Information
Reviews
Write Your Own Review
Only registered users can write reviews. Please Sign in or create an account
To Top