Be the first to review this product
£74.99
Out of stock
Product code
A1368
Atmospheric print featuring Sir Bobby Charlton, Jimmy Greaves and Roger Hunt on England duty - personally signed by the trio of legends.
Categories:Football, Football Legends
Dispatch time:Usually dispatched within 2-3 working days
Notify me when this product is in stock
Add to Wish List Add to Compare
Share
Facebook Twitter Pinterest
Hologram Certificate of Authenticity
Over 15 years verifiable history
100% authentic hand signed
Have a question? Call us 01202 406777
Skip to the end of the images gallery 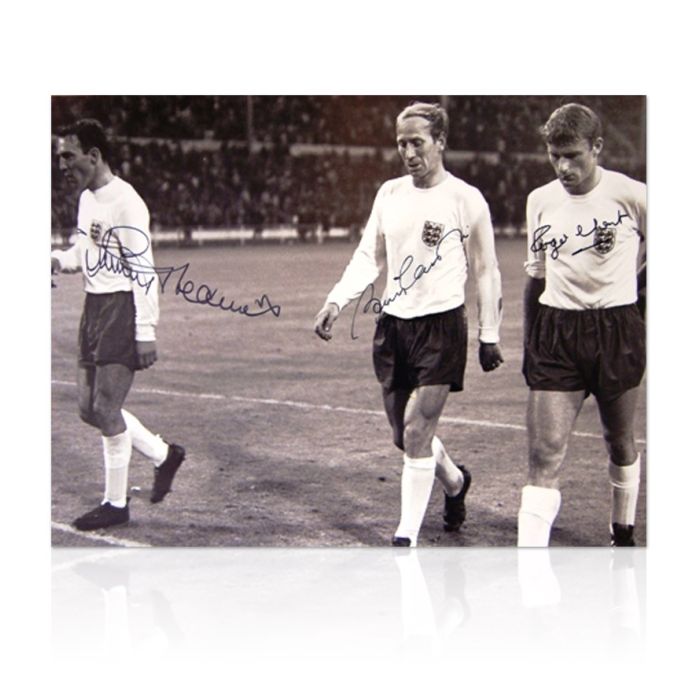 Details
England's record goalscorer with 49 goals for his country, Sir Bobby Charlton is quite simply one of the greatest players in the history of British football. Charlton began his Manchester United club career in 1956, and was part of the famous 'Busby Babes' side that was so tragically torn apart two years later by the Munich air disaster, a tragedy that very nearly cost Charlton his life at the tender age of just 20. The midfielder soon became renowned for his attacking prowess and ferocious long range shooting and in 1965 he inspired United to the Football League title. Just a year later after being name European Footballer of the Year, Charlton helped inspire England to glory in the 1966 World Cup - scoring three goals en route to the final. In 1968, Charlton had the honour of captaining Manchester United to their first ever European Cup triumph, starring in the win over Benfica with two goals of his own. After an illustrious career at Old Trafford spanning 17 years, Charlton left United in 1973 for Preston North End and held the club record number of appearances (758) for over three decades until it was finally broken by Ryan Giggs. Sir Bobby was knighted in 1994. One of Anfield's favourite sons, Roger Hunt formed a formidable strike partnership with Ian St John for Liverpool through the 1960s and between them they scored an incredible 340 league goals in a decade that saw the club lay the foundations of the famous boot room dynasty. Hunt was signed by manager Phil Taylor in July 1958 but it was under the coaching regime of Bill Shankly that he blossomed, scoring on his debut against Scunthorpe in an old Second Division clash in 1959. It was to prove the first of many for the prolific Lancashire-born striker and through the decade he was to finish as Liverpool's leading marksmen for eight consecutive seasons. Together Hunt and St John were one of the most feared and respected partnerships in the English game and their combined goals helped Liverpool claim two First Division titles and the FA Cup. His finest hour, however, came in England colours. Hunt played all six games of the triumphant World Cup campaign and was one of the 11 heroes who triumphed over West Germany at Wembley in the final, helping the country lift the Jules Rimet trophy. One of the most naturally gifted and prolific strikers of any era, Jimmy Greaves was born to score goals and in an iconic career that spanned three glorious decades, that is exactly what he did with an unerring regularity for club and country. Greaves was simply sensational in front of goal and from the moment he marked his debut for Chelsea as a 17-year-old in 1957 with a goal, it was obvious he was destined for great things. He spent four seasons at Stamford Bridge and scored an incredible 124 times in just 157 appearances. It was, however, in the famous white of Tottenham Hotspur that he was to truly establish himself as one of the game's greats. Signed by Bill Nicholson in 1961 after a brief and unhappy sojourn in Italy with AC Milan, Greaves found his spiritual home at White Hart Lane and his arrival in north London was the beginning of a nine-year love affair between the player and the club. The striker lit up the old First Division with Spurs, finishing the league's top scorer in four separate seasons and his goals helped the club to lift the FA Cup in 1962 and 1967. In 1963, he was part of the Tottenham team who became the first British side to lift a European trophy after they famously beat Atletico Madrid 5-1 in the final of the Cup Winners' Cup. He left Spurs aged 30 in 1970 having rewritten the club's record books. In total, he scored a breathtaking 266 goals in 379 games for the Lilywhites and is still widely regarded as the greatest striker in Tottenham's illustrious history. Greaves was even more prolific in the white of England. He marked his international debut against Peru in 1959 with a goal and over the next eight years he played times for his country and scored 44 times. He is third on the all-time England goalscorers list behind Bobby Charlton and Gary Lineker but his goals per game ratio remains superior to both. Injury robbed him of the chance to play in the 1966 World Cup final but his impact on the international stage was undimmed by the cruel twist of fate and he will forever be remembered as one of England's greatest ever strikers. Own a piece of sporting history Sir Bobby Charlton, Jimmy Greaves and Roger Hunt were all prolific goalscorers for club and country - doing themselves proud time and time again for England. This iconic print shows all three stars together at Wembley Stadium and is hand-signed by Charlton, Greaves and Hunt themselves. This is a wonderful piece of sporting memorabilia. Each signed print also comes with a certificate of authenticity.
More Information
Reviews
Write Your Own Review
Only registered users can write reviews. Please Sign in or create an account
To Top