Be the first to review this product
£199.99
Out of stock
Product code
A1484
Wonderful 30x22 large framed montage of Sir Bobby Robson - signed by the managerial legend himself.
Approximate size:22.5 (H) x 30.5 (W) x 2 (D) inches
Categories:Football, England, Sir Bobby Robson
Dispatch time:Usually dispatched within 8-10 working days
Notify me when this product is in stock
Add to Wish List Add to Compare
Share
Facebook Twitter Pinterest
Hologram Certificate of Authenticity
Over 15 years verifiable history
100% authentic hand signed
Have a question? Call us 01202 406777
Skip to the end of the images gallery 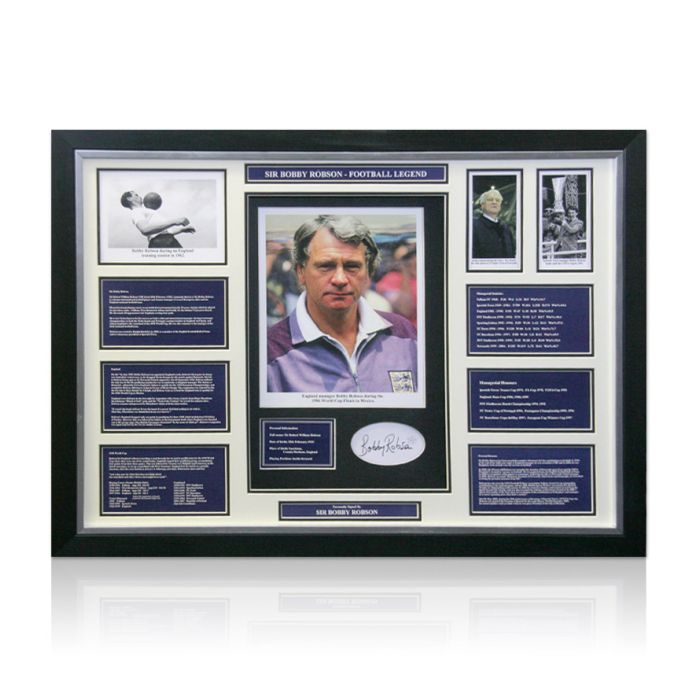 Details
One of the finest English managers in the history of the game, Sir Bobby Robson's illustrious career spanned five glorious decades and he remains arguably the greatest England coach behind the late, great Sir Alf Ramsey. A prolific striker for Fulham and West Bromich Albion in his playing days, Robson began his managerial career in 1968 in London with the Cottagers but it was at Portman Road with Ipswich that he forged a reputation as one of the country's most innovative and successful coaches. Robson spent 13 years with the Blues, guiding the club to triumphs in the Texaco Cup in 1973, the FA Cup five years later and finally the Uefa Cup in 1981 and it was no surprise when the Football Association asked him to succeed Ron Greenwood as England manager in 1982. It was the start of eight years in which the national team finally shrugged off the memories of underachievement throughout the 1970s and under Robson, England reach the quarter-finals of the 1986 World Cup and, most famously, the semi-finals of the tournament four years later, agonisingly losing to West Germany on penalties. He returned to club management after Italia 90, taking over at PSV Eindhoven and leading the club to the Dutch Championship in both 1991 and 1992. Successful stints at FC Porto and Barcelona followed, during which he added more silverware to his collection and confirmed his reputation as one of Europe's most astute and consistent coaches. He was appointed Newcastle United's manager in 1999 to a euphoric reception from the Toon Army and although he was now in his 60s, he transformed the club's fortunes, steering the side away from the foot of the Premier League table. Knighted in 2002, even Robson was unable to deliver trophies at St James' Park but under his guidance, the Magpies finished fourth, third and fifth in successive seasons and qualified for the Champions League for the first time - assuring his place in the folklore of both the club and the English game. Own a piece of sporting history Sir Bobby Robson is one of football's most loved characters and also one of the greatest managers we've ever seen. This excellent 30x22 framed montage print is personally signed by Sir Bobby himself and is a top class piece of sporting memorabilia. Each print also comes with a certificate of authenticity.
More Information
Reviews
Write Your Own Review
Only registered users can write reviews. Please Sign in or create an account
To Top