Be the first to review this product
£94.99
Out of stock
Product code
A1087
Replica shirt from the 1965 European Cup Winners' Cup Final, which they went on to win 2-0. Personally signed by legends Sir Geoff Hurst and Martin Peters.
Categories:Football, Football Legends, 1966 England Team, Martin Peters, Sir Geoff Hurst, West Ham, Shirts, Signed Football Shirts, West Ham United
Dispatch time:Usually dispatched within 2-3 working days
Notify me when this product is in stock
Add to Wish List Add to Compare
Share
Facebook Twitter Pinterest
Hologram Certificate of Authenticity
Over 15 years verifiable history
100% authentic hand signed
Have a question? Call us 01202 406777
Skip to the end of the images gallery 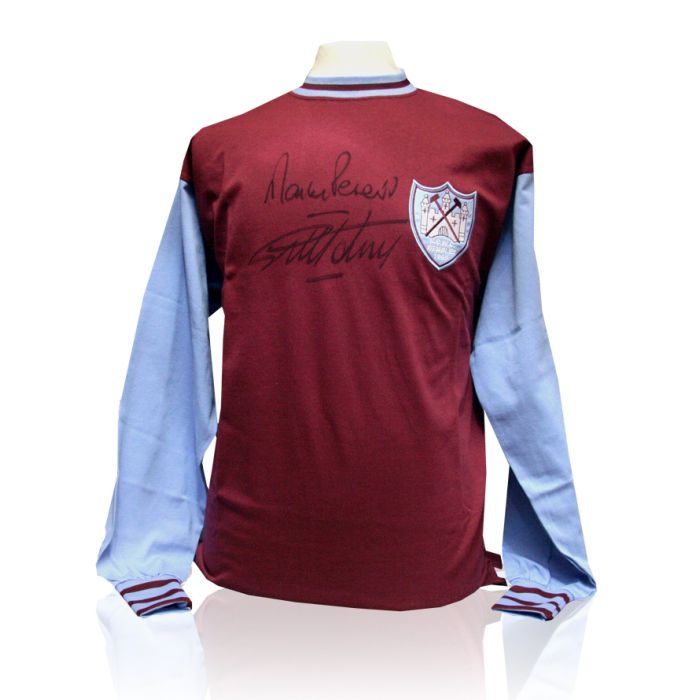 Details
Sir Geoff Hurst and Martin Peters were immortalised in English football history when the final whistle blew on the World Cup final at Wembley in 1966 and Sir Alf Ramsey's side were confirmed as world champions. Both men ensured their place in folklore that day as Hurst famously scored the first and to date only World Cup final hat-trick while Peters weighed in with England's second of the game, a goal which would have given Ramsey's side victory in normal time had it not been for West Germany's late equaliser. But while both players are true England greats, they are also both iconic names in the history of West Ham United and between they saw 24 years of distinguished service at Upton Park. Born in Lancashire, Hurst moved to Essex at the age of eight and joined the Hammers as an apprentice. Initially a central midfielder, Hammers manager Ron Greenwood converted him into a striker and he went onto to make his first team debut in 1959. Over the next 13 years, he went onto make 411 league appearances for the club, scoring 180 goals in the process. He was a key figure in the West Ham side that beat Preston 3-2 in the 1964 FA Cup final at Wembley and was again to the fore a year later, again at Wembley, as the Hammers lifted the Cup Winners' Cup after beating Munich 1860. Like Hurst, Peters was also a West Ham trainee and made his senior debut in 1962 against Cardiff City. He enjoyed 11 seasons in the Hammers first team and although he missed out on selection for the victorious he 1964 FA Cup final side, he was in the heart of the midfield when the Hammers claimed the Cup Winners' Cup in 1965. In total, the London-born star played 302 league games for the club and scored an impressive 81 times from midfield. Own a piece of sporting history Sir Geoff Hurst and Martin Peters won fame, fortune and football immortality as part of the England side that beat West Germany to lift the 1966 World Cup but they were also great servants of West Ham United. Each shirt is issued with a certificate of authenticity.
More Information
Reviews
Write Your Own Review
Only registered users can write reviews. Please Sign in or create an account
To Top