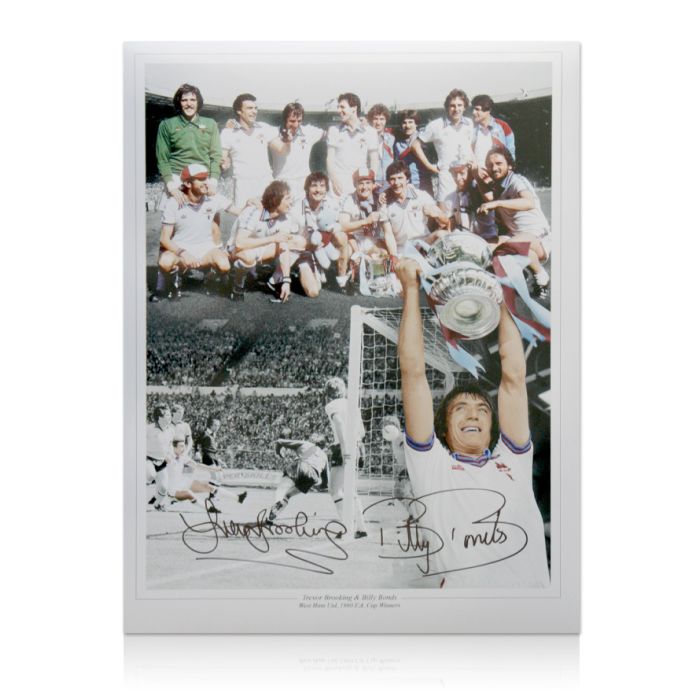 Details
Billy Bonds spent a total of 27 years at West Ham United as both a player and manager and in his nearly three decades of loyal service to the Hammers he established himself as one of the club's most legendary players. A tough-tackling defender, Bonds was signed from Charlton by Ron Greenwood in 1967 for £50,000 and would spend the next 21 seasons at Upton Park, amassing an incredible 663 appearances for the Hammers, as well as chipping in with 48 goals. At his peak during the 1970s, Bonds was appointed first team captain in 1974 when the late, great Bobby Moore left the club and just a year later he lead the side to the FA Cup final at Wembley in which they lifted the famous old trophy after a 2-0 victory over Fulham. Twelve months later he took the team to the 1976 UEFA Cup Winners' Cup final but this time had to settle for a runners-up medal after a 4-2 Anderlecht triumph. His playing days finally came to an end in 1988 at the age of 42 but two years later he was appointed club manager when Lou Macari resigned. He had four years in the job, leading the side to promotion twice before he resigned in August 1994. Born and raised in the Barking area of east London, Brooking went on to make over 600 appearances for his beloved local club West Ham United, scoring 103 times during a 17 year spell at Upton Park. The midfielder was noted for his intelligent play, making the number 10 shirt his own at the Boleyn Ground, and his style exemplified the traditional pass and move style that West Ham had been associated with during the late sixties and early seventies. Twice an FA Cup winner with the Hammers in 1975 and 1980, Brooking's attacking prowess and cultured passing skills also made him one of the most popular players the club had ever seen. The individual highlight of Brooking's career was scoring the winning goal in the 1980 FA Cup final at Wembley Stadium with a tremendous header in the Hammers' 1-0 win over Arsenal - a result made even more impressive by the fact that West Ham was a Second Division side at the time. Brooking's illustrious career also saw him earn 47 England caps, scoring five times for his country along the way. Since retiring from the game Brooking has enjoyed a successful career as a BBC pundit, as caretaker manager of West Ham and as the FA's Director of Football Development. He was knighted for his services to sport in 2004. Own a piece of sporting history West Ham United's shock FA Cup final win over Arsenal in 1980 was a momentus day in the history of the east end club. This fabulous colour montage celebrates that success and is personally signed by skipper Billy Bonds and goalscorer Sir Trevor Brooking. It is a fantastic piece of football memorabilia. Each print also comes with a certificate of authenticity.
More Information
Reviews
Write Your Own Review
Only registered users can write reviews. Please Sign in or create an account
To Top