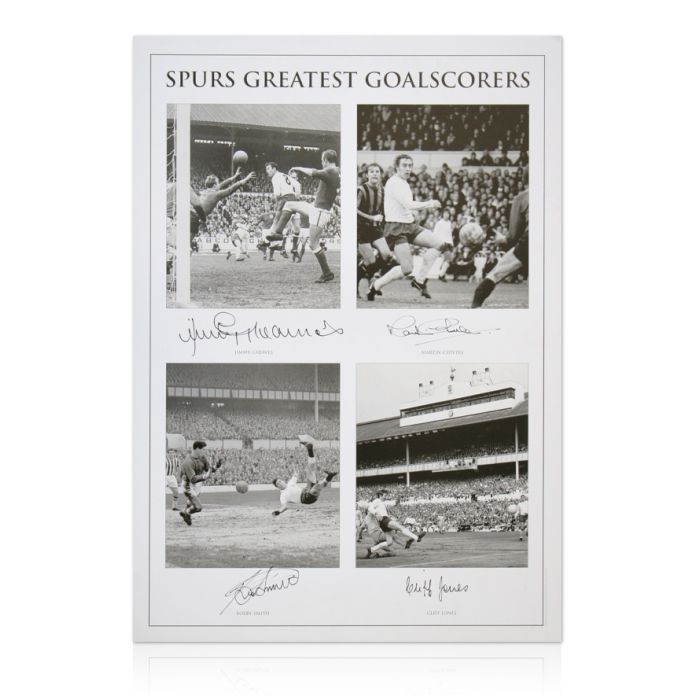 Details
About Jimmy Greaves One of the most naturally gifted and prolific strikers of any era, Jimmy Greaves was born to score goals and in an iconic career that spanned three glorious decades, that is exactly what he did with an unerring regularity for club and country. Greaves was simply sensational in front of goal and from the moment he marked his debut for Chelsea as a 17-year-old in 1957 with a goal, it was obvious he was destined for great things. He spent four seasons at Stamford Bridge and scored an incredible 124 times in just 157 appearances. It was, however, in the famous white of Tottenham Hotspur that he was to truly establish himself as one of the game's greats. Signed by Bill Nicholson in 1961 after a brief and unhappy sojourn in Italy with AC Milan, Greaves found his spiritual home at White Hart Lane and his arrival in north London was the beginning of a nine-year love affair between the player and the club. The striker lit up the old First Division with Spurs, finishing the league's top scorer in four separate seasons and his goals helped the club to lift the FA Cup in 1962 and 1967. In 1963, he was part of the Tottenham team who became the first British side to lift a European trophy after they famously beat Atletico Madrid 5-1 in the final of the Cup Winners' Cup. He left Spurs aged 30 in 1970 having rewritten the club's record books. In total, he scored a breathtaking 266 goals in 379 games for the Lilywhites and is still widely regarded as the greatest striker in Tottenham's illustrious history. Greaves was even more prolific in the white of England. He marked his international debut against Peru in 1959 with a goal and over the next eight years he played times for his country and scored 44 times. He is third on the all-time England goalscorers list behind Bobby Charlton and Gary Lineker but his goals per game ratio remains superior to both. Injury robbed him of the chance to play in the 1966 World Cup final but his impact on the international stage was undimmed by the cruel twist of fate and he will forever be remembered as one of England's greatest ever strikers. About Martin Chivers A pacey and powerful centre forward, Martin Chivers spent eight years at White Hart Lane and was key member of the early 1970s side that won silverware in three successive seasons under legendary manager Bill Nicholson Born in Southampton, he began his professional career with Saints but in January 1968 Nicholson decided he needed to bolster his attacking resources and signed Chivers for a then club record fee of £125,000. The deal made him the most expensive player in the country and he began replaying the club's considerable investment immediately - scoring on his debut against Sheffield Wednesday. Chivers truly blossomed at the Lane following Jimmy Greaves' departure to West Ham in 1970 and in the 1970-71 campaign he scored 21 times in the First Division, as well as scoring both goals in Spurs' 2-0 victory over Aston Villa in the final of the League Cup. Capped for the first time by England the same year, Chivers rich vein of form continued the following season. The striker scored 44 times in 64 appearances for the club, including a brace in the Uefa Cup final victory over Wolverhampton Wanderers, and his place in club folklore was already assured. He added the 1973 League Cup to his collection after Norwich were beaten in the final and by the time Chivers left Spurs for Swiss side Servette in 1976, he had amassed a grand total of 367 appearances for the club, scoring 174 times. He was inducted into the Tottenham Hotspur Hall of Fame in 2007. About Cliff Jones Cliff Jones began his professional career with his hometown club Swansea in the 1950s but it was in the red of Wales and subsequently white of Tottenham that the winger established his reputation as one of the greatest players of his generation. Signed by Bill Nicholson in 1958 after the World Cup in Sweden, Jones quickly became the great entertainer of arguably the greatest ever Spurs side and the left winger was instrumental in Tottenham's success throughout the 1960s. Jones scored 15 league goals in 29 appearances during the historic Double-winning 1960-61 season and was also a key part of the teams that claimed the 1962 and 1967 FA Cup, as well as the 1963 Cup Winners' Cup. In total, Jones spent 10 hugely successful seasons at White Hart Lane before leaving for Fulham in 1968. He played 370 times for the clun and scored 159 times from the midfield. About Bobby Smith Bobby Smith began his professional career with Chelsea in 1950 but it was at Spurs under the legendary Bill Nicholson that the big striker truly blossomed and during nine hugely successful seasons at White Hart Lane, the Yorkshireman became a key figure in the Tottenham set-up. Lured away from Stamford Bridge in 1955, Smith scored a record 36 goals in the 1967-58 season but his greatest contribution came in the famous double-winning campaign of 1960-61 when he netted 33 times, including a goal in the 2-0 win over Leicester City in the FA Cup final. He was on target again in 1962 as Spurs retained the FA Cup with a 3-1 victory over Burnley at Wembley and he was also in the Tottenham side that lifted the Cup Winners' Cup the following year after victory over Atletico Madrid. Smith, who also scored 13 times for England in 15 international appearances, left the club in 1964 having found the back of the net an incredible 208 times in 317 games for the Lilywhites. Own a piece of sporting history Spurs are one of the most famous clubs in the history of the English games and this striking print is signed by four of their greatest ever goalscorers. The print is an unique piece of Tottenham memorabilia and is personally signed. Each print is issued with a certificate of authenticity.
More Information
Reviews
Write Your Own Review
Only registered users can write reviews. Please Sign in or create an account
To Top