Be the first to review this product
£279.99
Out of stock
Product code
TB1120
This fantastic Puma football boot was signed by French footballing legend Thierry Henry in black permanent marker pen during a professional closed signing session held by one of A1 Sporting Memorabilia's most trusted partners. Each item comes complete with its own Certificate of Authenticity which serves as proof that your item is 100% genuine.
Categories:Football, Arsenal, Football Legends, World Cup, Thierry Henry, Football Teams, Barcelona, All Products
Dispatch time:Usually dispatched within 2-3 working days
Notify me when this product is in stock
Add to Wish List Add to Compare
Share
Facebook Twitter Pinterest
Hologram Certificate of Authenticity
Over 15 years verifiable history
100% authentic hand signed
Have a question? Call us 01202 406777
Skip to the end of the images gallery 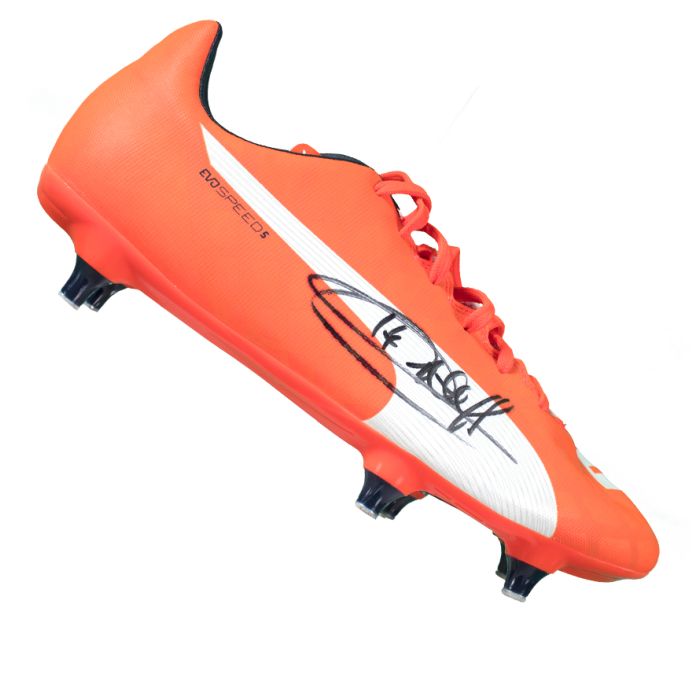 Details
About Thierry Henry Arsenal's all-time record goalscorer, Thierry Henry spent eight glorious years with the Gunners and under the astute guidance of compatriot Arsene Wenger, the French striker made a phenomenal impact on English football. Signed for £10.5 million in 1999 after an ill-fated spell in Italy with Juventus, Henry quickly found his feet in London and once Wenger had converted him from a winger into a striker, the stage was set for a love affair which was to rewrite the Arsenal record books. With Henry spearheading the attack, the Gunners won the Premiership title in both 2002 and 2004 and the FA Cup in 2002, 2003 and 2005. Henry's goal were priceless and in October 2005 his brace against Sparta Prague in the Champions League took his personal goal tally to 186, eclipsing Ian Wright's previous club record of 185. In February the following year, he scored a Premiership goal against West Ham to reach 151 in the league, breaking Cliff Bastin's league goals record. His sensational performances for Arsenal were also rewarded with a deluge of awards. He won back-to-back PFA Player of the Year Wards in 2003 and 2004 and was also a three-times Football Writers' Association Footballer of the Year. He won the European Golden Boot in both 2004 and 2005 and was the Premiership's top scorer in no less than four separate seasons. Henry left Arsenal for Spain and Barcelona in the summer of 2007 with his place in Gunners folklore guaranteed. In total, the flying Frenchman scored an amazing 226 goals in 369 appearances in the famous red and white shirt. Own a piece of sporting history Thierry Henry is the greatest striker in the history of Arsenal and in eight glorious seasons with the Gunners, the Frenchman scored more goals for the club than any other player and inspired the team to two Premiership and three FA Cup triumphs. The boot is personally signed by Henry himself and is a stunning piece of Arsenal memorabilia that celebrates the record-breaking career of one of the Premiership's greatest talents. Each boot is issued with a certificate of authenticity.
More Information
Reviews
Write Your Own Review
Only registered users can write reviews. Please Sign in or create an account
To Top