Be the first to review this product
£99.99
Out of stock
Product code
A1097
Superb print of Nobby Stiles and Alan Ball celebrating World Cup victory at Wembley in 1966, personally signed by the two England legends.
Approximate size:20 x 14 inches
Categories:Football, England, World Cup, Alan Ball, Nobby Stiles
Dispatch time:Usually dispatched within 2-3 working days
Notify me when this product is in stock
Add to Wish List Add to Compare
Share
Facebook Twitter Pinterest
Hologram Certificate of Authenticity
Over 15 years verifiable history
100% authentic hand signed
Have a question? Call us 01202 406777
Skip to the end of the images gallery 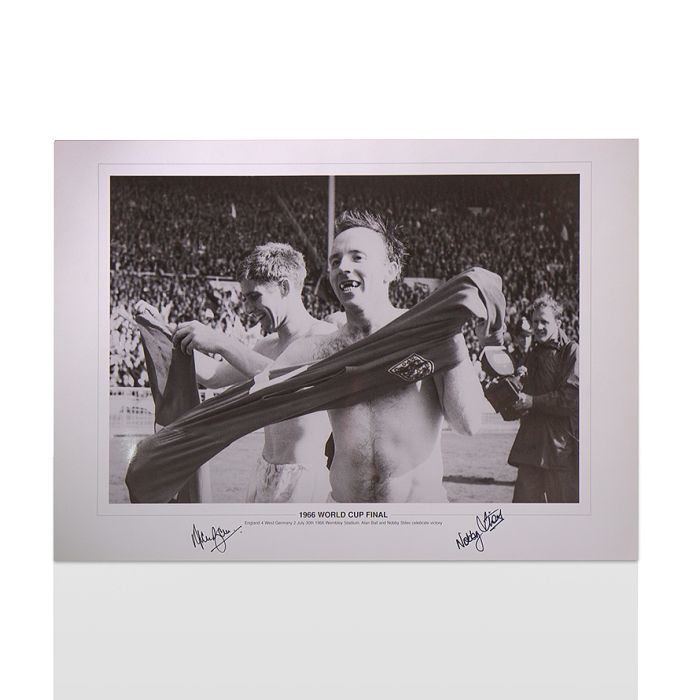 Details
Born in Manchester in 1942, Nobby Stiles found fame with Manchester United but earned his place in English football folklore as part of Sir Alf Ramsey's 1966 World Cup-winning side. He and Old Trafford team-mate Sir Bobby Charlton remain the only two Englishmen in history to have won both the World and European Cup. The most tenacious and feared man markers of his generation, Stiles made his England debut against Scotland at Wembley in 1965 as Ramsey fine tuned his preparationS for the World Cup finals the following year. The United midfielder made an instant impression and he was to play in the eight of the next nine warm-up games. By the time the World Cup proper arrived, he was an automatic choice in the team and his all-action performances, toothy grin and phenomenal work rate earned him thousands of fans who appreciated the platform he built for the team's more creative players. Lifting the World Cup after beating West Germany in the final was the pinnacle of his career and the pictures of Stiles dancing with the Jules Rimet trophy after the final whistle at Wembley is one of the day's most enduring images. Stiles won a total of 28 caps for his country. He also went on to lift the European Cup with Manchester United in 1968 and he was finally awarded the MBE in 2000 for his services to the game. The youngest member of Sir Alf Ramsey's World Cup-winning side, Alan Ball was an indefatigable midfielder whose performance at Wembley in 1966 in 120 minutes of drama and tension against West Germany earned him the Man of the Match Award. Born in Greater Manchester in 1945, Ball was first capped against Yugosalavia in Belgrade in 1965 and at the age of 21, Ramsay decided he would be one of the 22 players to mount England's bid to become world champions for the first time the following summer. The Blackpool player became an integral part of the side and despite his relative international inexperience, he was a star throughout the tournament and in the final itself he was perpetual movement in the heart of the England midfield, winning and taking the corner with 15 minutes of normal time remaining that led to Martin Peters' all-important equaliser. In the 30 minutes of added time Ball continued to work tirelessly as others around him wilted and England famously emerged victorious. Ball went on to play in the 1970 World Cup in Mexico and was awarded an MBE by The Queen in 2000. Three years later he was inducted into the English Football Hall of Fame. Own a piece of sporting history England's dramatic 4-2 victory over West Germany in the 1966 World Cup final at Wembley remains the greatest day in English football history and made heroes of dynamic midfield duo Nobby Stiles and Alan Ball. This print is personally signed both Stiles and Ball and is a stunning piece of sporting memorabilia that captures the two men in the wake of the final whistle. Each print is issued with a certificate of authenticity.
More Information
Reviews
Write Your Own Review
Only registered users can write reviews. Please Sign in or create an account
To Top