Be the first to review this product
Special Price £8.00 Regular Price £39.99
In stock
Only 5 left
Product code
BBT183
Limited edition print, hand-signed by Wigan legend, Andy Farrell. This is a superb piece of rugby league memorabilia featuring the autograph of one of the game's greatest players.
Approximate size:340mm x 445mm
Categories:Rugby, Rugby League, 80% Off Sale, Gifts Under £50
Dispatch time:Usually dispatched within 2-3 working days
Add to Wish List Add to Compare
Share
Facebook Twitter Pinterest
Hologram Certificate of Authenticity
Over 15 years verifiable history
100% authentic hand signed
Have a question? Call us 01202 406777
Skip to the end of the images gallery 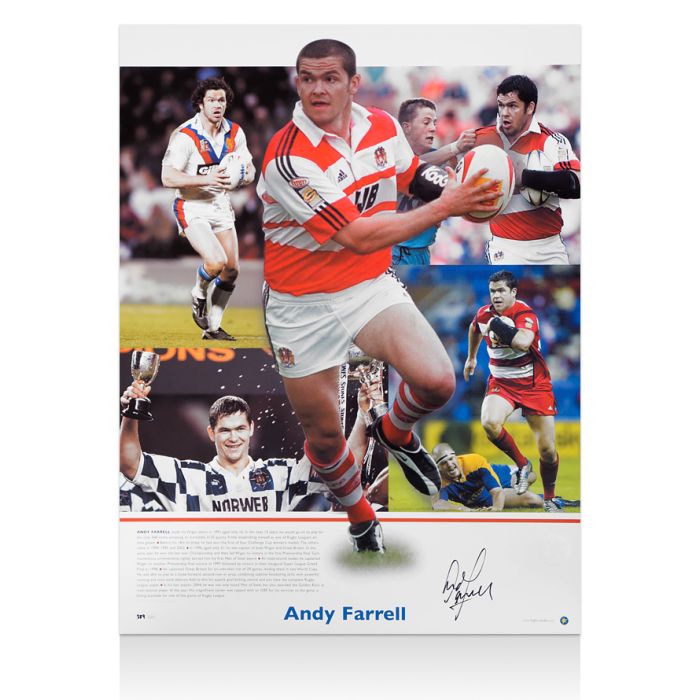 Details
Andy Farrell made his Wigan debut in 1991 aged only 16. In the next 13 years, he would go on to play for the club 368 times, amassing an incredible 3135 points, firmly establishing himself as one of Rugby League's all-time greats. Before his 18th birthday he had won the first of four Challenge Cup winner's medals. The others came in 1994, 1995 and 2002. 1996 proved to be an eventful year - aged only 21, he was made Wigan captain and subsequently captain of Great Britain. He won the last ever Championship and then led Wigan to victory in the first Premiership final, in which he was also named Man of the Match. Such momentous achievements rightly earned him his first Man of Steel award. An inspirational leader, he captained Wigan to another Premiership final victory in 1997 followed by victory in their inaugural Super League Grand Final in 1998. He captained Great Britain for an unbroken run of 29 games, leading them in two World Cups. He was able to play as a loose-forward, second-row or prop, combining sublime footballing skills with powerful running and rock-solid defence. Add to this his superb goal-kicking record and you have the complete Rugby League player. In his last season, 2004, he was not only voted Man of Steel, but also awarded the Golden Boot as international player of the year. His magnificent career was capped with an OBE for his services to the game, fitting accolade for one of the giants of Rugby League. Own a Piece of Sporting History Few players have matched Andy Farrell for ability and success. His original autograph makes this print extremely collectable and an excellent investment for any rugby league follower. Personally Signed All 500 prints have been individually signed by Andy Farrell. Strictly Limited Edition Only 500, hand-signed copies of this image will ever be released by us. Early ordering is essential if you don't want to miss out. Authenticity Guaranteed This print has been independently authenticated by Grant Thornton using the Authenticate process. This means you can be 100% certain that the print is a strictly limited edition of 500 copies and that each one has been personally signed by Andy Farrell.
More Information
Reviews
Write Your Own Review
Only registered users can write reviews. Please Sign in or create an account
To Top