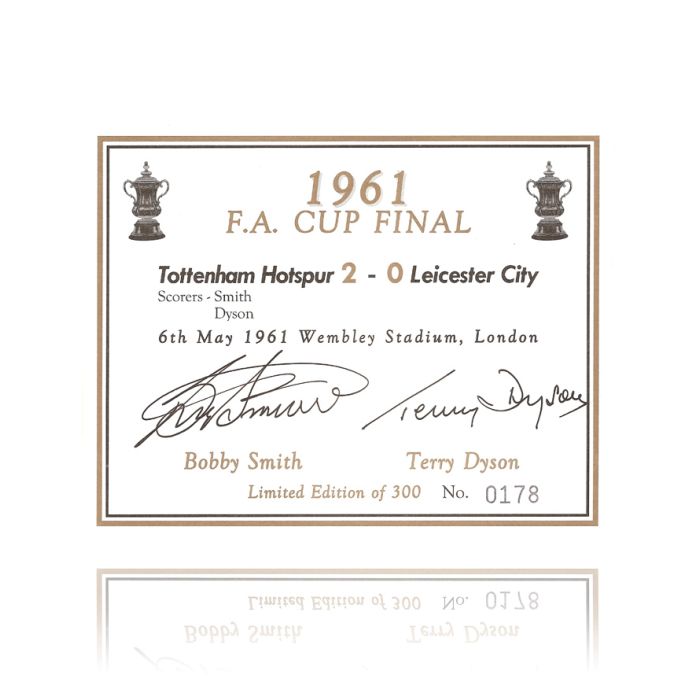 Details
Can be used on a champagne / wine bottle or would be ideal for displaying in a frame with a print or football shirt. We have a number of different labels available, why not collect a complete set. About Bobby Smith Bobby Smith began his professional career with Chelsea in 1950 but it was at Spurs under the legendary Bill Nicholson that the big striker truly blossomed and during nine hugely successful seasons at White Hart Lane, the Yorkshireman became a key figure in the Tottenham set-up. Lured away from Stamford Bridge in 1955, Smith scored a record 36 goals in the 1967-58 season but his greatest contribution came in the famous double-winning campaign of 1960-61 when he netted 33 times, including a goal in the 2-0 win over Leicester City in the FA Cup final. He was on target again in 1962 as Spurs retained the FA Cup with a 3-1 victory over Burnley at Wembley and he was also in the Tottenham side that lifted the Cup Winners' Cup the following year after victory over Atletico Madrid. Smith, who also scored 13 times for England in 15 international appearances, left the club in 1964 having found the back of the net an incredible 208 times in 317 games for the Lilywhites. About Terry Dyson Once famously described as a "hyperactive beaver", Terry Dyson gave a Spurs a decade of loyal service after signing for the Lilywhites in 1955 and was key member of Bill Nicholson's side in the early 1960s, the most successful period in the club's history. A dynamic midfielder, he was only five foot three inches tall but what he lacked in physical stature, he more than made up for with heart and talent and as Spurs began to collect silverware on a regular basis, Dyson's career flourished. He remains the only Spurs players to score a hat-trick in the north London derby against Arsenal and was part of the Tottenham sides that famously won the double in 1960-61, the 1962 FA Cup final and the 1963 Uefa Cup Winner's Cup final. In total, he made 209 appearances for Spurs, scoring 55 goals.
More Information
Reviews
Write Your Own Review
Only registered users can write reviews. Please Sign in or create an account
To Top