Be the first to review this product
£349.99
Out of stock
Product code
A3012
Beautifully presented boxing gloves signed by both boxing legends Frank Bruno and Mike Tyson. Mounted in an impressive dome frame with a print showing both boxers in action. *Please note: Frame colour may be different to one displayed in photo.
Approximate size:62cm x 92cm
Categories:Boxing, Frank Bruno, Mike Tyson
Dispatch time:Usually dispatched within 8-10 working days
Notify me when this product is in stock
Add to Wish List Add to Compare
Share
Facebook Twitter Pinterest
Hologram Certificate of Authenticity
Over 15 years verifiable history
100% authentic hand signed
Have a question? Call us 01202 406777
Skip to the end of the images gallery 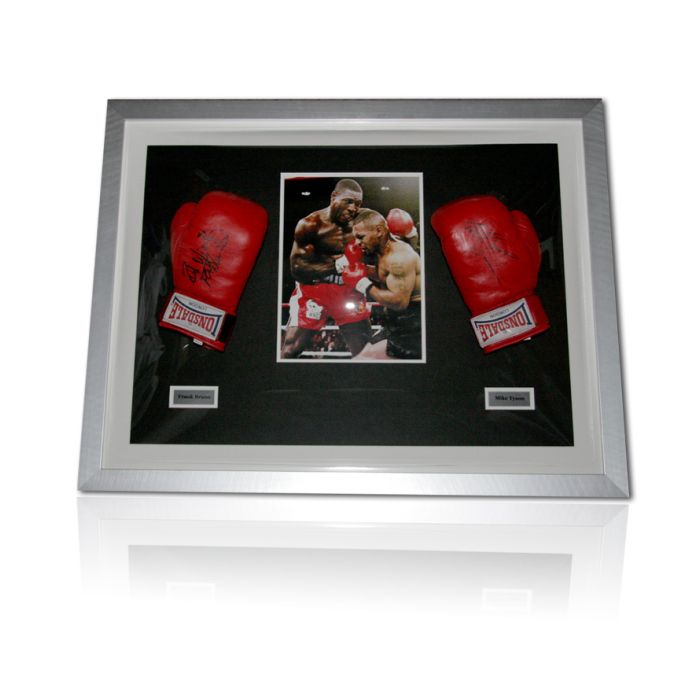 Details
Beautifully presented boxing gloves signed by both boxing legends Frank Bruno and Mike Tyson. Mounted in an impressive dome frame with a print showing both boxers in action. The most revered, feared and infamous fighters of his or any other generation, 'Iron Mike' Tyson remains the youngest man in boxing history to win the WBC, WBA and IBF heavyweight titles as he became undisputed world champion in the late 1980s. Tyson made his professional debut in 1985 in New York, knocking out Hector Mercedes in the first round, and earned himself a burgeoning reputation for his brutal, explosive style with 18 further victories by knockout. The following year he was handed his first world title fight against Trevor Berbick, the reigning WBC champion. The bout lasted less than two rounds when Tyson was handed victory by a TKO and at the age of 20 years and four months, he was the youngster ever heavyweight world champion. Tyson unified the heavyweight division with defeats of James Smith for the WBA belt and Tony Tucker, to claim the IBF title and by the end of 1987, he was the undisputed heavyweight champion. The first professional defeat of his career came in 1990 in one of sport's greatest ever upsets when he was knocked out by no-hoper James 'Buster' Douglas in the 10th round of their fight in Tokyo and it was to be six years before he held a world title again after defeating Frank Bruno. The latter years of his career were mired in controversy, most notoriously when he was disqualified for biting Evander Holyfield's ear in 1997 and his last big bout came in 2002 when he faced Lennox Lewis in Memphis but was knocked out in the eighth round by a right hook. But despite his well-documented problems, Tyson remains one of boxing's all-time greats and the sport has yet to produce another fighter with his raw aggression, speed, power and ability to grab the public's attention. At the height of his powers, Frank Bruno was the most popular sportsmen in the country and to this day the former world heavyweight champion remains a national icon. Born in London in 1961, Bruno turned professional in 1980 and 21 consecutive wins by knockout quickly earned him a reputation as one of boxing's most entertaining and explosive fighters and it was not long before he had his first shot at a world title. In 1986 he challenged American Tim Witherspoon for the WBA title but despite leading the contest on all three judges' cards, he was knocked down in the eleventh round. His second chance came three years later against Mike Tyson and although he was eventually stopped in the fifth, Bruno won a legion of new fans with a juddering left hook in the first round that visibly rocked Tyson and gave the Londoner brief hope of pulling of a sensational shock. Bruno refused to give up on his dream of winning a world title and nine years after his clash with Witherspoon, the dream was realised. Bruno faced American Oliver McCall for the WBC belt and after 12 gruelling rounds that tested the stamina of both fighters to the limit, Bruno emerged the victor on points. He was finally a world heavyweight champion. His reign was to last for only one more fight as Tyson claimed the belt in Glasgow the following year. It was to be Bruno's last professional bout and he duly retired in 1996 with a proud record of 40 victories from 45 fights, 38 of those 40 wins coming by knockout. Own a piece of sporting history Frank Bruno's last fight as a professional boxer was in his first defence of his WBC world title in a re-match against the fearsome Mike Tyson. This iconic presentation shows the two heavyweights doing battle in 1996 and contains a glove signed by each fighter. This is a rare and much coveted item of boxing memorabilia. Each item also comes with a certificate of authenticity. *Please note: Frame colour may be different to one displayed in photo.
More Information
Reviews
Write Your Own Review
Only registered users can write reviews. Please Sign in or create an account
To Top