Be the first to review this product
£499.99
Out of stock
Product code
BBT074
A great portrait shot of George Best in action for Manchester United
Categories:Football, George Best, Manchester United
Dispatch time:Usually dispatched within 2-3 working days
Notify me when this product is in stock
Add to Wish List Add to Compare
Share
Facebook Twitter Pinterest
Hologram Certificate of Authenticity
Over 15 years verifiable history
100% authentic hand signed
Have a question? Call us 01202 406777
Skip to the end of the images gallery 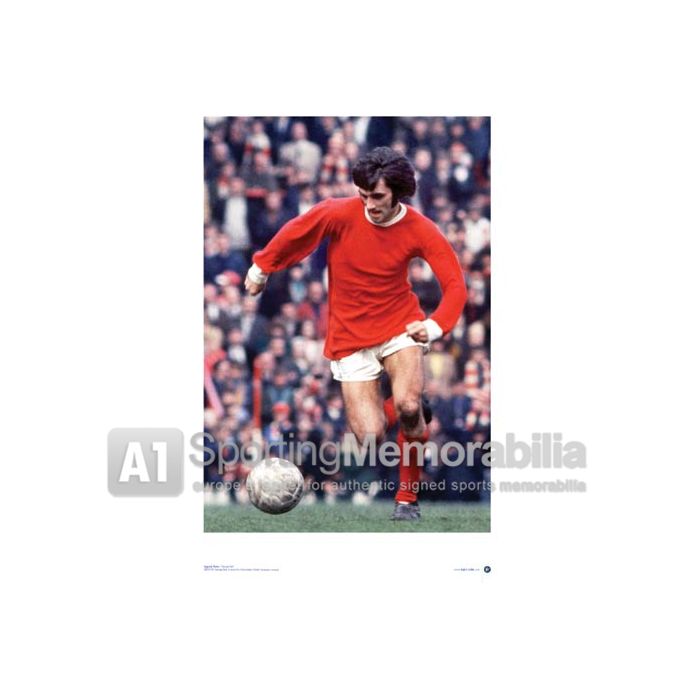 Details
A limited edition A2 print of George Best in action for Manchester United signed by the legendary star. Each print is accompanied by a certificate of authenticity. George Best made his Manchester United debut, aged 17, on 14 September 1963 against West Bromwich Albion at Old Trafford in a 1-0 victory and two weeks later scored his first goal for the club against Burnley. In his second season, George was a key figure in Manchester United's title success. His talent and showmanship made him a crowd and media favourite. He was dubbed "the fifth Beatle" for his long hair, good looks and extravagant celebrity lifestyle. The 1966-67 season was again successful as Manchester United claimed the league title by four points. The following season was his annus mirabilis, he became a European Cup winner, scoring in the 4-1 defeat of Benfica in the final. Best was also crowned European Footballer of the Year and Football Writers' Association Player of the Year. George quit Manchester United at the tender age of 27 and his last competitive game for the club was on 1 January 1974 against Queens Park Rangers at Loftus Road. In total Best made 466 appearances for Manchester United in all competitions from 1963 to 1974, and scored 178 goals (including six in one game against fourth division Northampton Town). He was the clubs top scorer for six consecutive seasons, and was the First Division's top scorer in the 1967-68 season.
More Information
Reviews
Write Your Own Review
Only registered users can write reviews. Please Sign in or create an account
To Top