Be the first to review this product
£44.99
Out of stock
Product code
A1157
Iconic colour print of Glenn Hoddle in action for Spurs in the 1982 FA Cup final, personally signed by the White Hart Lane legend.
Approximate size:16 x 12 inches
Categories:Football, Tottenham Hotspur, Glenn Hoddle, Gifts Under £50
Dispatch time:Usually dispatched within 2-3 working days
Notify me when this product is in stock
Add to Wish List Add to Compare
Share
Facebook Twitter Pinterest
Hologram Certificate of Authenticity
Over 15 years verifiable history
100% authentic hand signed
Have a question? Call us 01202 406777
Skip to the end of the images gallery 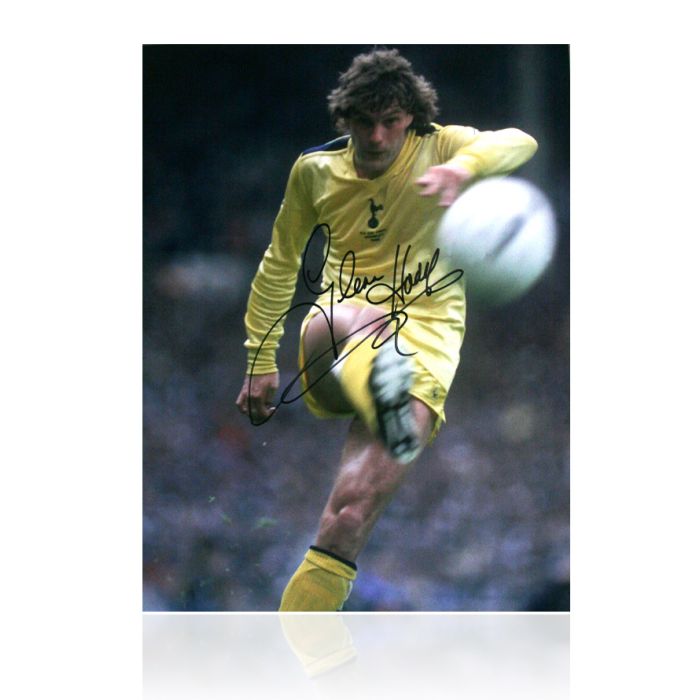 Details
Universally acknowledged as the most elegant and talented player of his generation, Glenn Hoddle spent 12 years as a player at White Hart Lane and earned himself a place in Spurs' folklore with his dazzling range of passing and exquisite close control. Hoddle joined Tottenham as a 17-year-old apprentice in 1974 after being recommended by Spurs great Martin Chivers and a little over a year later he made his first team debut as a substitute in the league clash with Norwich. His first start for the club came early in 1976 against Stoke City and the young midfielder announced his arrival in typically flamboyant style as he beat England goalkeeper Peter Shilton with a sensational long-range drive. Hoddle quickly established himself as a first team regular under Keith Burkinshaw's tenure as manager and the White Hart Lane faithful took the cultured playmaker to their hearts. His call-up to England colours in 1979 was little surprise and he went on to win 53 caps for his country. It was, however, in the 1980s that Hoddle was to enjoy the most successful period of his club career as Spurs won back-to-back FA Cup finals in 1981 and 1982 and he was the man who pulled the strings two years later as Tottenham marched into the Uefa Cup final against Anderlecht. Injury denied him his place in the final itself but his contribution en route to the dramatic penalty shootout victory was unquestionable. The love affair with the club as a player came to an end in 1987 when he signed for French side Monaco. His return to White Hart Lane in 2001 as manager was to ultimately prove ill-fated but his prominent place in Tottenham's history was already assured. Own a piece of sporting history Glenn Hoddle was simply one of the talented and best-loved players in Tottenham's illustrious history and this beautiful print shows the outrageously gifted playmaker in action in the 1982 FA Cup final victory over QPR in which he scored. The 16x12 print is personally signed Hoddle himself and is a stunning piece of sporting memorabilia that captures the midfield maestro in full flow at Wembley. Each print is issued with a certificate of authenticity.
More Information
Reviews
Write Your Own Review
Only registered users can write reviews. Please Sign in or create an account
To Top