Be the first to review this product
£64.99
Out of stock
Product code
A1180
Striking print capturing Jonathan Woodgate's winning goal in the 2008 Carling Cup final against Chelsea - signed by the man himself.
Categories:Football, Tottenham Hotspur, Jonathan Woodgate
Dispatch time:Usually dispatched within 2-3 working days
Notify me when this product is in stock
Add to Wish List Add to Compare
Share
Facebook Twitter Pinterest
Hologram Certificate of Authenticity
Over 15 years verifiable history
100% authentic hand signed
Have a question? Call us 01202 406777
Skip to the end of the images gallery 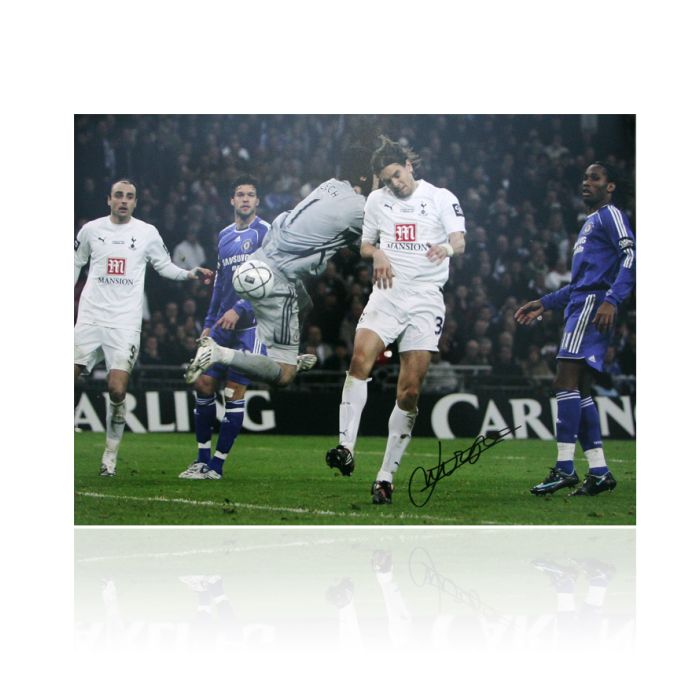 Details
Born in Middlesbrough in 1980, Jonathan Woodgate has become widely recognised as one of the most cultured and accomplished centre backs of his generation and his performances for Spurs since signing in January 2008 have been a revelation. Woodgate began his senior career with Leeds United after being released by his hometown club of Middlesbrough and in five seasons at Elland Road, the defender forged a reputation as one of the game's most naturally gifted defenders. His instinct ability to read a game, allied with his natural pace and physical presence, soon earned him an international call and Kevin Keegan handed him his first England cap in 1999. Newcastle invested £9 million in January 2003 to take the defender to St James' Park but his stay with the Magpies was shortlived and Spanish giants Real Madrid prised him away the following year with a £13.4 million bid. Woodgate's La Liga career was wrecked by injury, however, and after three ill-fated years in Spain he was back in England with Middlesbrough, where he regained full fitness and was soon reminding supporters of the talent that had made him such an outstanding prospect earlier in his career. In January 2008, Tottenham set their sights on the England star and persuaded him to move to London. It was to prove to be an inspired deal with Woodgate scoring the winner for his new club in the Carling Cup final victory against Chelsea at Wembley and earning himself the Man of the Match award. Own a piece of sporting history England international Jonathan Woodgate stamped his own mark on Tottenham Hotspur's proud history with a Man of the Match performance and winning extra-time goal in the Carling Cup final against Chelsea in February 2008. This magnificent print is personally signed by Woodgate himself and is a stunning piece of Spurs memorabilia. Each print is issued with a certificate of authenticity.
More Information
Reviews
Write Your Own Review
Only registered users can write reviews. Please Sign in or create an account
To Top