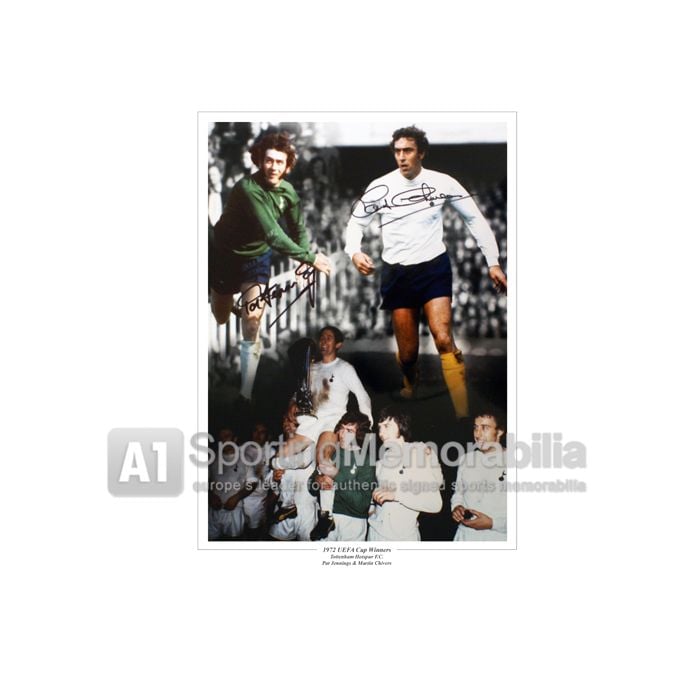 Details
A pacey and powerful centre forward, Martin Chivers spent eight years at White Hart Lane and was key member of the early 1970s side that won silverware in three successive seasons under legendary manager Bill Nicholson Born in Southampton, he began his professional career with Saints but in January 1968 Nicholson decided he needed to bolster his attacking resources and signed Chivers for a then club record fee of £125,000. The deal made him the most expensive player in the country and he began replaying the club's considerable investment immediately - scoring on his debut against Sheffield Wednesday. Chivers truly blossomed at the Lane following Jimmy Greaves' departure to West Ham in 1970 and in the 1970-71 campaign he scored 21 times in the First Division, as well as scoring both goals in Spurs' 2-0 victory over Aston Villa in the final of the League Cup. Capped for the first time by England the same year, Chivers rich vein of form continued the following season. The striker scored 44 times in 64 appearances for the club, including a brace in the Uefa Cup final victory over Wolverhampton Wanderers, and his place in club folklore was already assured. He added the 1973 League Cup to his collection after Norwich were beaten in the final and by the time Chivers left Spurs for Swiss side Servette in 1976, he had amassed a grand total of 367 appearances for the club, scoring 174 times. He was inducted into the Tottenham Hotspur Hall of Fame in 2007. Patrick Anthony Jennings signed for Tottenham at the age of 19 and although his arrival at White Hart Lane generated few headlines or fanfare, he was to become arguably the greatest goalkeeper in the club's history. The Northern Irish legend spent 13 distinguished years at Spurs, amassing an incredible 472 league appearances for the Lilywhites - and 591 in all competitions - and during his reign as the club's undisputed number one keeper, Tottenham won the 1967 FA Cup, the 1971 and 1973 League Cup and the 1972 FA Cup. His eye-catching performances in goal were recognised in 1973 when he was named the Football Writers' Association Football of the Year and three years later he won the Professional Footballers' Association version of the award. After his retirement, he was also awarded the MBE and OBE for his services to football. Famed for the size of his hands, Jennings joined the exclusive club of goalkeepers who have scored a goal in a professional match when his punt in the 1967 Charity Shield at Wembley embarrassed his Manchester United counterpart Alex Stepney and found the back of the net but the amiable Irishman will forever be remembered by Spurs fans as the rock in goal during one of the club's golden eras. Own a piece of sporting history Tottenham beat Wolverhampton Wanderers in the Uefa Cup final of 1972 to lift their second European trophy and this striking montage commemorates the club's famous triumph. The montage is personally signed by Pat Jennings and Martin Chivers, who both starred in the final, and is a unique piece of Spurs memorabilia. Each 16x12 print is issued with a certificate of authenticity.
More Information
Reviews
Write Your Own Review
Only registered users can write reviews. Please Sign in or create an account
To Top