Be the first to review this product
£64.99
Out of stock
Product code
BBT149
Limited edition, hand-signed print of Ossie Ardiles playing for Tottenham Hotspur during the 1981 FA Cup Final. This is a great piece of Spurs memorabilia, personally signed by a one of their greatest players.
Categories:Football, Tottenham Hotspur, Ossie Ardiles
Dispatch time:Usually dispatched within 2-3 working days
Notify me when this product is in stock
Add to Wish List Add to Compare
Share
Facebook Twitter Pinterest
Hologram Certificate of Authenticity
Over 15 years verifiable history
100% authentic hand signed
Have a question? Call us 01202 406777
Skip to the end of the images gallery 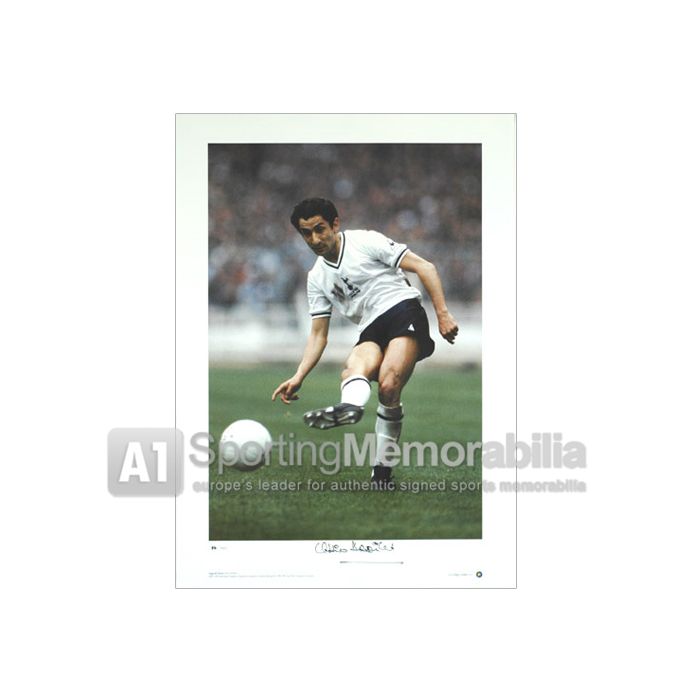 Details
On 10 July 1978, just 15 days after Argentina's triumph over Holland in the World Cup, Spurs manager Keith Burkinshaw pulled off a sensational coup for his Tottenham Hotspur side when he signed two of Argentina's top players - Osvaldo 'Ossie' Ardiles and Ricardo Villa. In signing the two brilliant midfielders, Burkinshaw significantly strengthened his newly-promoted side. Ardiles, the small, wiry midfielder had been one of the most influential players in the Argentinian side and immediately made his impact felt at White Hart Lane. During his four years with the club he became something of a cult hero along with his compatriot Ricardo Villa and team-mate Glen Hoddle, and watched the team go from strength to strength. Ardiles played in that spectacular FA Cup replay victory at Wembley against Manchester City, in 1981, which included Villa's memorable goal. It was a golden moment which unfortunately was to evade both men the following year when events in the Falklands impacted on both the semi-final and the final of the FA Cup. After being booed by Leicester fans throughout the semi-final, Ardiles left to play in the World Cup, but before doing so, he engineered a magnificent goal which ensured Spurs a place in the final, but he never returned to White Hart Lane. Ricardo Villa was forced to watch the final on television as it was considered to be too insensitive to allow him to play, at a time when the British wasTask Force was approaching the Falklands. Own a piece of sporting history This wonderful, full-colour portrait of the nimble-footed Argentine midfielder, Ossie Ardiles, in action during the glorious Spurs victory against Manchester United in the 1981 FA Cup, is a highly collectable item of memorabilia for any Spurs fan. Personally signed Each print in this hand-numbered edition of 500 has been personally signed by Osvaldo Ardiles and comes, beautifully-packaged with a Certificate of Authenticity. Strictly limited edition Only 500 copies of this print have been produced, once these have been sold, no more will ever be released. Order your copy now to make sure that you do not miss out.
More Information
Reviews
Write Your Own Review
Only registered users can write reviews. Please Sign in or create an account
To Top