Be the first to review this product
£74.99
Out of stock
Product code
A1095
Stunning print of Ricky Villa's winning goal in the 1981 FA Cup final replay, signed by Spurs legends Villa, Ossie Ardiles and Steve Perryman.
Categories:Football, Steve Perryman, Tottenham Hotspur, Ossie Ardiles, Ricky Villa
Dispatch time:Usually dispatched within 2-3 working days
Notify me when this product is in stock
Add to Wish List Add to Compare
Share
Facebook Twitter Pinterest
Hologram Certificate of Authenticity
Over 15 years verifiable history
100% authentic hand signed
Have a question? Call us 01202 406777
Skip to the end of the images gallery 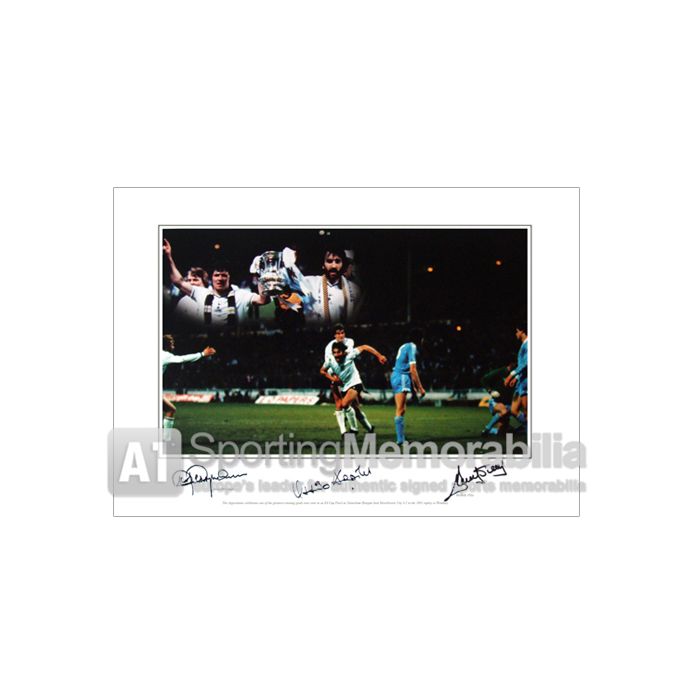 Details
Ricky Villa signed for Tottenham after Argentina's triumph in the 1978 World Cup and the hirsute midfielder was an instant hit with the White Hart Lane faithful after scoring on his debut for the club in an old First Division clash with Nottingham Forest. Tall, elegant and talented, Villa graced the Spurs midfield in a total of 133 league games but it was in the FA Cup that he earned himself a place in Tottenham folklore with arguably the greatest goal in the history of the competition. The year was 1981 and Spurs were facing an FA Cup final replay against Manchester City at Wembley after the two sides had drawn 1-1. Villa had been substituted in the first game and had made little effort to hide his disgust at the decision as he trudged towards the dressing room. Tottenham boss Keith Burkinshaw decided to overlook the Argentinean's outburst and Villa was in the starting line-up for the replay. The midfielder was determined to repay his manager's faith in spectacular style. The game was agonisingly balanced at 2-2 late in the second-half when Villa collected the ball on the edge of the City box but rather than pass, he embarked on a jinking, incisive foray into the area, beating three defenders on the way before slipping the ball past goalkeeper Joe Corrigan. Spurs were the winners and Villa had etched his name into FA Cup history. The most loyal servant in Spurs' illustrious history, Steve Perryman joined the club as a teenage apprentice in July 1967 and during a 17-year career at White Hart Lane, he went on to make a record 866 appearances for the first team. Signed by Bill Nicholson, Perryman was a tenacious and tireless midfielder and made his league debut in 1969 against Sunderland at the age of 17. He was soon one of the first names on the Tottenham team sheet and by the age of 20, Nicholson had already entrusted him with the captain's armband. Perryman remains one of the most successful Spurs players of all time, winning the 1971 and 1973 League Cups, the 1981 and 1982 FA Cups, as well Uefa Cup in 1972 and then again in 1984 Uefa Cup after Tottenham famously beat Anderlecht in a dramatic penalty shootout. Although only capped once by England, Perryman was the heartbeat of the Spurs side for more than a decade and although he moved to right back towards the end of his career, he was always in the thick of the action. He was named the Football Writers' Player of the Year in 1982 and he was awarded the MBE in 1986 - the same year his love affair as a player with the Lane finally came to an end. One of the most popular players in Spurs' history, Ossie Ardiles epitomised the club's free-flowing football philosophy and in his 10 seasons in north London, the Argentinean midfielder became a cult figure who was worshipped by the White Hart Lane faithful. Signed in the wake of Argentina's 1978 World cup final triumph over Holland, the diminutive playmaker caused a huge stir on his arrival in the UK with international team-mate Ricky Villa and his performances on the pitch quickly confirmed that the hype was more than justified. A skilful player brimming with vision, Ardiles adapted to English football with ease and his partnership with Glenn Hoddle in the heart of the Tottenham midfield made the team into a real force and the trophies followed. The Argentinean was part of both the 1981 and 1982 FA Cup-winning sides under Keith Burkinshaw's astute management and although the outbreak of the Falklands War forced him into a temporary exile with Paris Saint Germain in France, he returned to White Hart Lane to help the side lift the 1984 Uefa Cup. His playing days with the club came to an end in 1988 and although he endured an ill-fated season as Spurs manager in the early 1990s, he remains one of Tottenham's favourite sons. Own a piece of sporting history Tottenham's triumph over Manchester City in their FA Cup final replay at Wembley in 1981 is one of the competition's most famous contests and this iconic print captures Ricky Villa seconds after scoring his famous winning goal. Personally signed by Villa, Ossie Ardiles and Steve Perryman, the montage is a wonderful piece of Spurs memorabilia that recalls one of the greatest moments in the club's history. Each print is issued with a certificate of authenticity.
More Information
Reviews
Write Your Own Review
Only registered users can write reviews. Please Sign in or create an account
To Top