Be the first to review this product
£99.99
Out of stock
Product code
BBT137
Limited edition Manchester United print, hand-signed by Ruud Van Nistelrooy. This is a great print featuring a superb picture of Ruud celebrating one of his many goals in front of the Stretford End of Old Trafford.
Approximate size:23.5 x 17 inches
Categories:Football, Manchester United, Gifts Under £100, Ruud Van Nistelrooy
Dispatch time:Usually dispatched within 2-3 working days
Notify me when this product is in stock
Add to Wish List Add to Compare
Share
Facebook Twitter Pinterest
Hologram Certificate of Authenticity
Over 15 years verifiable history
100% authentic hand signed
Have a question? Call us 01202 406777
Skip to the end of the images gallery 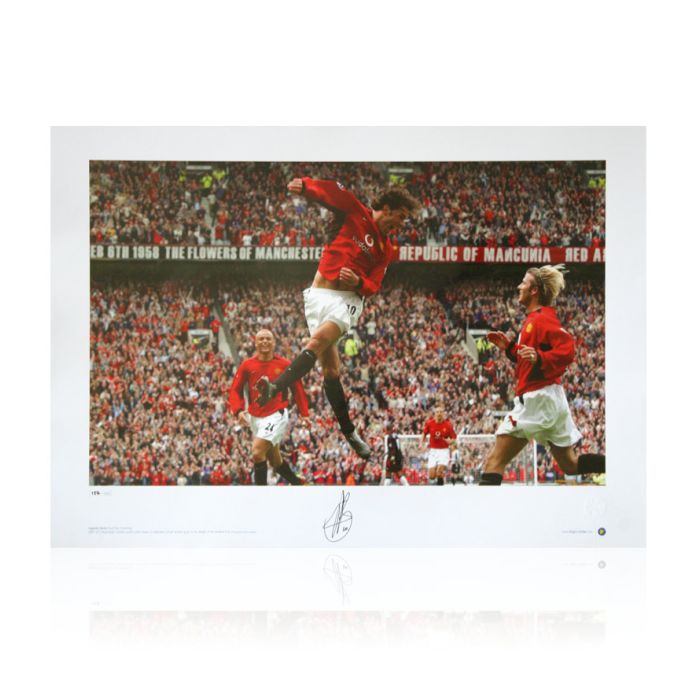 Details
Alex Ferguson's efforts to secure Ruud Van Nistelrooy for his team were initially thwarted in April 2000 when a medical revealed a significant weakness in the right knee of the PSV Eindhoven star striker. United wanted him to undergo surgery on his knee but he refused, desperate to play in front of the Dutch fans in Euro 2000. It was a bad decision, and two days later he collapsed in agony, having ruptured the cruciate ligament in the same knee, putting him out of the game for a whole year. So it was not until April 2001 that Fergie finally got his man - albeit for a staggering £19 million - a British record transfer fee. If observers thought the amount excessive for a player who had suffered such a major injury, they were soon to be convinced of the Dutch Master's true worth - his debut season with the club was nothing short of sensational. He totted up an amazing 36 goals - which should have brought rich rewards, but Man U failed to win any trophy that season, for the first time in four years. Summoning the same level of gutsy determination which had served him so well during his fight back to full fitness, the Dutchman gritted his teeth and set about securing the Premiership title for the Red Devils in the 2002/03 season. His incredible 44 goals ensured that the trophy was brought back to Old Trafford. Fifteen of those goals were scored in the last 10 matches of the season, allowing United to oust Arsenal from the top position, to claim the title. Ruud Van Nistelrooy has established himself as one of the all time greatest players ever to have pulled on the illustrious red jersey of Manchester United. As Alex Ferguson said of his star striker, "You cannot dispute that the boy's finishing is fantastic." Own a piece of sporting history This fantastic, full-colour print of Manchester United legend, Ruud Van Nistelrooy, shows him leaping in celebration after netting yet another goal in front of the Stretford End, and perfectly captures the sheer joy of an ace striker at the pinnacle of his playing powers. Personally signed Memorabilia signed by Ruud Van Nistelrooy is rare and highly collectable and he has personally signed each print in this edition of 500. Strictly limited edition Only 500 of this print have been produced and once these have been sold, no more will ever be released. Order your print today to avoid missing out.
More Information
Reviews
Write Your Own Review
Only registered users can write reviews. Please Sign in or create an account
To Top