Be the first to review this product
£24.99
Out of stock
Product code
A1518
Tottenham Hotspur Player by Player book by Ivan Ponting and Tom Morgan - hand signed by Jimmy Greaves, Ossie Ardiles and Ricky Villa.
Categories:Football, Jimmy Greaves, Tottenham Hotspur, Ossie Ardiles, Ricky Villa, Signed Sports Books, Gifts Under £50
Dispatch time:Usually dispatched within 2-3 working days
Notify me when this product is in stock
Add to Wish List Add to Compare
Share
Facebook Twitter Pinterest
Hologram Certificate of Authenticity
Over 15 years verifiable history
100% authentic hand signed
Have a question? Call us 01202 406777
Skip to the end of the images gallery 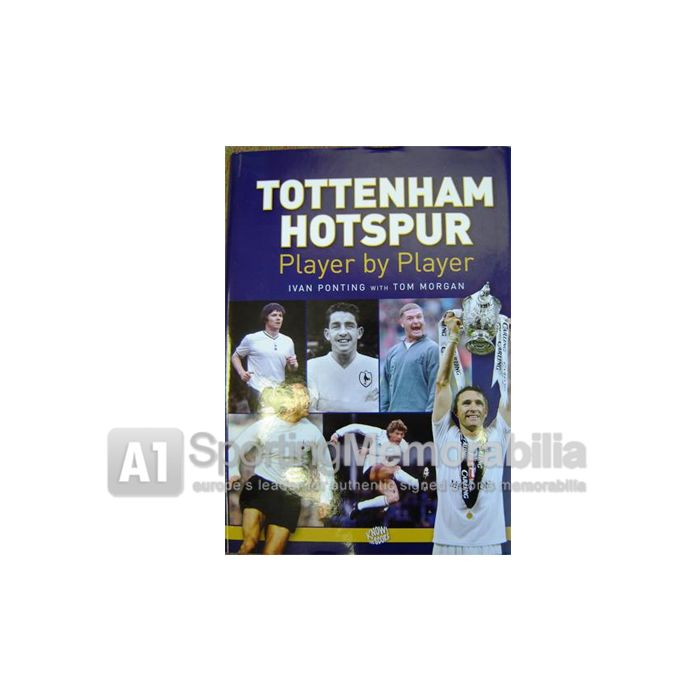 Details
One of the most naturally gifted and prolific strikers of any era, Jimmy Greaves was born to score goals and in an iconic career that spanned three glorious decades, that is exactly what he did with an unerring regularity for club and country. Greaves was simply sensational in front of goal and from the moment he marked his debut for Chelsea as a 17-year-old in 1957 with a goal, it was obvious he was destined for great things. He spent four seasons at Stamford Bridge and scored an incredible 124 times in just 157 appearances. It was, however, in the famous white of Tottenham Hotspur that he was to truly establish himself as one of the game's greats. Signed by Bill Nicholson in 1961 after a brief and unhappy sojourn in Italy with AC Milan, Greaves found his spiritual home at White Hart Lane and his arrival in north London was the beginning of a nine-year love affair between the player and the club. The striker lit up the old First Division with Spurs, finishing the league's top scorer in four separate seasons and his goals helped the club to lift the FA Cup in 1962 and 1967. In 1963, he was part of the Tottenham team who became the first British side to lift a European trophy after they famously beat Atletico Madrid 5-1 in the final of the Cup Winners' Cup. He left Spurs aged 30 in 1970 having rewritten the club's record books. In total, he scored a breathtaking 266 goals in 379 games for the Lilywhites and is still widely regarded as the greatest striker in Tottenham's illustrious history. Greaves was even more prolific in the white of England. He marked his international debut against Peru in 1959 with a goal and over the next eight years he played times for his country and scored 44 times. He is third on the all-time England goalscorers list behind Bobby Charlton and Gary Lineker but his goals per game ratio remains superior to both. Injury robbed him of the chance to play in the 1966 World Cup final but his impact on the international stage was undimmed by the cruel twist of fate and he will forever be remembered as one of England's greatest ever strikers. One of the most popular players in Spurs' history, Ossie Ardiles epitomised the club's free-flowing football philosophy and in his 10 seasons in north London, the Argentinean midfielder became a cult figure who was worshipped by the White Hart Lane faithful. Signed in the wake of Argentina's 1978 World cup final triumph over Holland, the diminutive playmaker caused a huge stir on his arrival in the UK with international team-mate Ricky Villa and his performances on the pitch quickly confirmed that the hype was more than justified. A skilful player brimming with vision, Ardiles adapted to English football with ease and his partnership with Glenn Hoddle in the heart of the Tottenham midfield made the team into a real force and the trophies followed. The Argentinean was part of both the 1981 and 1982 FA Cup-winning sides under Keith Burkinshaw's astute management and although the outbreak of the Falklands War forced him into a temporary exile with Paris Saint Germain in France, he returned to White Hart Lane to help the side lift the 1984 Uefa Cup. His playing days with the club came to an end in 1988 and although he endured an ill-fated season as Spurs manager in the early 1990s, he remains one of Tottenham's favourite sons. Ricky Villa signed for Tottenham after Argentina's triumph in the 1978 World Cup and the hirsute midfielder was an instant hit with the White Hart Lane faithful after scoring on his debut for the club in an old First Division clash with Nottingham Forest. Tall, elegant and talented, Villa graced the Spurs midfield in a total of 133 league games but it was in the FA Cup that he earned himself a place in Tottenham folklore with arguably the greatest goal in the history of the competition. The year was 1981 and Spurs were facing an FA Cup final replay against Manchester City at Wembley after the two sides had drawn 1-1. Villa had been substituted in the first game and had made little effort to hide his disgust at the decision as he trudged towards the dressing room. Tottenham boss Keith Burkinshaw decided to overlook the Argentinean's outburst and Villa was in the starting line-up for the replay. The midfielder was determined to repay his manager's faith in spectacular style. The game was agonisingly balanced at 2-2 late in the second-half when Villa collected the ball on the edge of the City box but rather than pass, he embarked on a jinking, incisive foray into the area, beating three defenders on the way before slipping the ball past goalkeeper Joe Corrigan. Spurs were the winners and Villa had etched his name into FA Cup history. Own a piece of sporting history Jimmy Greaves, Ossie Ardiles and Ricky Villa are three of the most popular players in the history of Tottenham Hotspur Football Club. This excellent book is hand-signed by all three stars and makes a fantastic piece of football memorabila, as well as a great read. Each book also comes with a certficate of authenticity signed by our managing director.
More Information
Reviews
Write Your Own Review
Only registered users can write reviews. Please Sign in or create an account
To Top