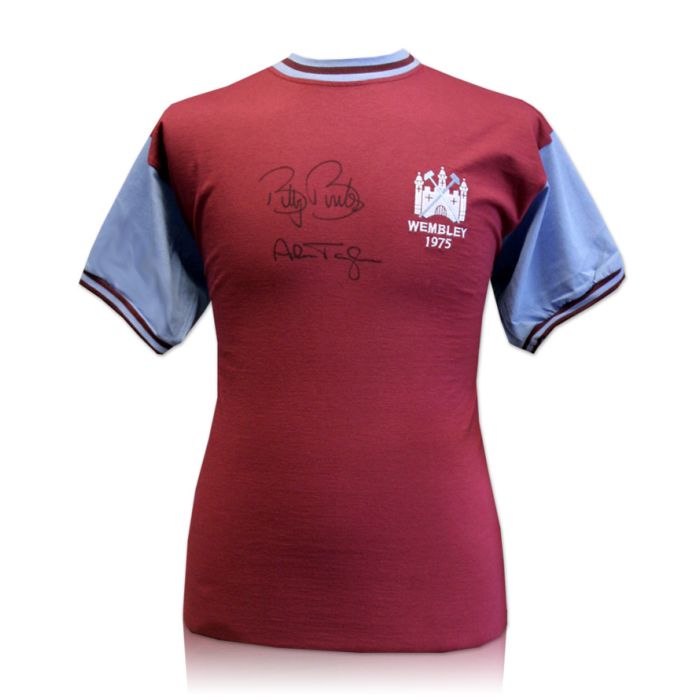 Details
About Billy Bonds Born in south east London in 1946, Billy Bonds came through the ranks at his local club Charlton Athletic but it was in the famous claret and blue of West Ham United that he made his name over three decades of loyal service. Signed by Hammers manager Ron Greenwood for £50,000 in the summer of 1967 and he made his first team debut against Sheffield Wednesday in the opening game of the 1967-68 season. It was to be the first of a phenomenal 793 appearances for West Ham and Bonds soon became a firm favourite with the Upton Park faithful. Athletic, whole-heartedly committed and tough tackling, Bonds started out at right back but moved to midfield and finally centre half later in his career. A natural leader on the pitch, Bonds was appointed club captain in 1974 in succession to Bobby Moore and a little over a year later, he led the team out at Wembley for the FA Cup final against Fulham, which the Hammers won 2-0. West Ham went onto to reach the final of the 1976 European Cup Winners' Cup and although they were beaten by Anderlecht, the team bounced back from the disappointment to lift the 1980 FA Cup after beating London neighbours Arsenal, making Bonds the only Hammers captain to lift the famous old trophy twice. His last game for the club came against Southampton in April 1988 at the age of 41. He was awarded the MBE in the same year and went to manage the club between 1990 and 1994. About Alan Taylor Although he played less than a 100 league games for the club, Alan Taylor's place in West Ham folklore is forever assured after his sensational contribution to the Hammers' 1975 FA Cup triumph which culminated in a Man of the Match performance against Fulham in the final at Wembley. Signed on his 21st birthday by Hammers boss John Lyall from lowly Rochdale in 1974, the striker announced his arrival in the top-flight with two goals in the FA Cup quarter-final win over Arsenal. The semi-final against Ipswich finished goalless but Taylor was back to his best in the replay with another brace to take West Ham to the final and a clash with London rivals Fulham. The game at Wembley remained goalless until the second-half and it was Taylor who broke the deadlock with a 61st-minute strike and three minutes later he doubled the Hammers' advantage. The Cottagers had no reply and West Ham lifted the cup. Although Taylor was to appear as a substitute in the club's appearance in the final of the European Cup Winners' Cup the following season, his heroics at Wembley was the highlight of his Upton Park career and what he will always be remembered fondly for by the Hammers faithful. Own a piece of sporting history Each signed shirt comes with a certificate of authenticity.
More Information
Reviews
Write Your Own Review
Only registered users can write reviews. Please Sign in or create an account
To Top